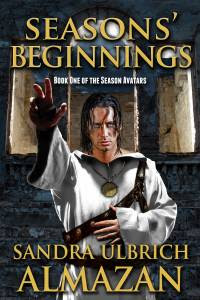 The God of Winter is perhaps the most frightening of the Four Gods and Goddesses. He controls not only the weather, but also the land of the dead. People who have committed great crimes are punished by having their souls frozen so they can't reincarnate. This is why Challens swear by saying "Freeze it!" or "That frozen such-and-such!" The God of Winter has two colors associated with Him: blue (for weather) and white (for death). The rest of the Four only have one color each.

Wistica is the capital of modern Challen. It's located in the southeast section of Challen, where the Chikasi River meets the Salt Waters. The Season Avatars maintain a second home in Wistica, since they come to the city at the start of every season to perform a soltrans ceremony at the Temple. Other key locations in Wistica are the kings' palace and the university. Wistica is semi-officially divided into quarters named after each of the seasons. (There's no wall or structures marking the borders between quarters.) Challens address letters in a way that we would consider upside-down. If you were to invite Gwen and the rest of the Season Avatars to take chocolate with you, you would write the following lines on the envelope: