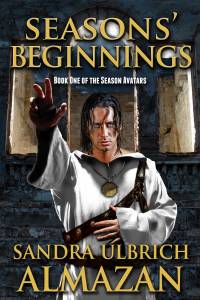 There as so many "S" characters in the Season Avatars series that I can't do full descriptions for them. Here's a quick rundown of what makes the letter "S" so special:

Goddess of Spring: The Four Gods and Goddesses of Challen have no names other than the season They're associated with. Spring is normally pictured as a matronly woman with long blonde hair, and She looks after the people of Challen. Although She's considered "married" to Winter, Summer and Fall aren't Their children.

God of Summer: Little is known about this quiet God, pictured as a green-skinned youth thin enough to disappear into a tree. He controls all the plants in Challen through His Avatars. Homosexual, bisexual, or transgender men, as well as men who wish to remain single for other reasons, might declare themselves Summersmen.

Salth: A magician from Kron's original time. Rumor has it she was born in a king's harem and escaped it thanks to her gifts. Obsessed with magic and time, she is both neglectful of her son Sal-thaath yet his fierce protector if he's threatened.

Sal-thaath: Salth's son, created through magic and skilled in magic himself. He seeks Kron out for company in Seasons' Beginnings.

Selathens: Descendants of people who fled the Dead Land when Salth's power increased. Most of them have settled near the border, but some moved inland and assimilated into the general population of Challen. Those who remain separate have split into two groups: those who want little to do with magic and those who worship Salth. Ysabel's father belongs to the latter group. Perhaps due to lingering resentment toward Salth, Selathens generally hold women in lower esteem than men.

Sophia: The Fall Avatar from Margaret's quartet. When Margaret dies suddenly, the other two members of the quartet have no interest in holding the group together, leaving the inexperienced Sophia to pick up the leadership.


I'll be participating in the March for Science in Chicago this morning and attending C2E2 the rest of the weekend, so I won't have much time to visit other blogs until Monday. My report on C2E2 will be delayed until May as well.

Have fun marching for science!