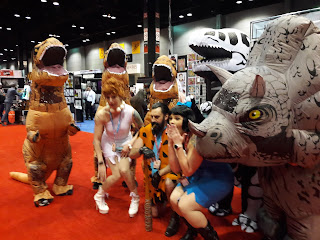 I have to admit I wasn't sure about attending C2E2 this year, since we're going to Star Wars Celebration in Chicago next month. However, when I learned Paul Rudd was going to be one of the guests, I knew I had to take Alex, who's a big Ant-Man fan. Alex is also on Spring Break, so he and I would be able to attend all three days. 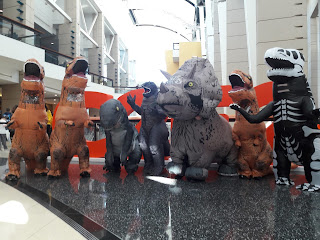 Friday got off to a rough start when Alex's badge came off his lanyard and was lost. Fortunately, although the event was almost sold out, I could still buy a replacement badge for him. (At least the kid badges aren't as expensive as the adult ones.) I dressed up briefly as a Jawa, but I spent most of the day going around with Alex on the show floor. There was a Dinosaur Parade scheduled for Friday, so I bought an inflatable costume so he could participate. By a lucky coincidence, the dinos ran into a group of Flintstone cosplayers, so that made for some great photos. The best part was when the parade trooped out to the "C2E2" sign, and the DJ played "Walk The Dinosaur." Later that evening, Alex and I went to an autograph signing for Paul Rudd. It was a long wait. (I had enough time to almost finish crocheting a Porg, and we didn't get out of there until after the convention closed.) Paul Rudd was gracious enough to stay until everyone in line got a chance to meet him. I gave him a crocheted Ant Man I made last week, and he seemed to like it. Alex was also happy to get a picture signed. 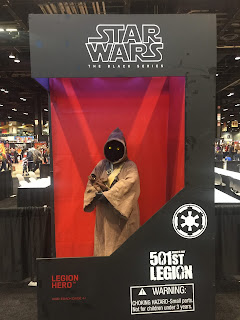 On Saturday, Eugene joined us and drove us in to the convention center. I wore my Jawa in the morning, and in the afternoon, I switched into my Imperial Officer for Droid Hunt. I spent nearly three hours walking the show floor, searching for people with special badges. (This is why I get my highest daily step counts at C2E2.) Even when I bought a pretzel and lemonade for Alex, I still encountered several people with badges. I also saw a couple of friends.

Sunday was a more laid-back day. We did present a toy landspeeder to a non-profit organization in the morning, and afterward, I changed into my Jawa and walked around with a group of other Jawas, a R2-D2, and a Tusken Raiders. We were quite a hit. One of the garrison members has a new O-O-O (evil C-3PO) costume, so we also got to take pictures with him. Hopefully I'll get a copy soon.

I didn't buy much at C2E2 this year, but I do have some good memories of it, and that's even better.

A Song for Spring

C2E2 is this weekend. I'm preparing a bunch of last-minute projects for the event, along with working on Dryads to Discover, working, taking care of family--my usual super-busy load. Rather than write a less-than-inspired post, I thought I'd share some music for the spring equinox, which is today:

What are your favorite spring-themed songs? Feel free to share them in the comments.

As a Beatles fan, I always enjoy finding new books about them. And if these books are written or edited by my friends, I have to help them get by, right?

Randee Dawn, a writer friend from Broad Universe, is co-editing an anthology of alternate Beatles stories. It's called Across the Universe: Tales of Alternative Beatles. They're currently running a Kickstarter campaign to fund it (see the link). The project is about two-thirds funded, with about two weeks left. Authors currently signed on to the anthology include Spider Robinson, David Gerrold, Cat Rambo, Gail Z. Martin, Jody Lynn Nye, and many more. If the project meets certain stretch goals, the editors will open up a few slots for submissions. I used to write Beatles fanfic, so it would be nice to get back to where I once belonged....

Actually, my Beatles fanfiction used to be on the e-zine Rooftop Sessions, which was run by my Beatles friend Susan Ryan. Unfortunately, I don't think the site is live any more, though you can learn more about it here and even access back issues. (You might even find very early versions of Lyon's Legacy and Twinned Universes, along with other stories of mine, through the Wayback Machine.) Susan's husband, Jim Ryan, was another contributor, and he recently collected some of his alternate Beatles stories in Alt Together Now: The Rooftop Sessions Fiction of James Ryan. It's been a long times since I've read them, but they include references to Live Aid, The Twilight Zone, Lord of the Rings, and Doctor Who. Sounds like a splendid time is guaranteed for all.

Please support both books if you can. In the meantime, I need to see if I can find my old fanfics. It would be interesting to see if they're worth republishing. Hello Goodbye for now...
Posted by Sandra Ulbrich Almazan at 12:00 AM 1 comment:

Our question for the month is Whose perspective do you like to write from best, the hero (protagonist) or villain (antagonist)? And why?

All of my stories are written from the protagonist's perspective, though occasionally I'll include the antagonist's perspective. As a reader, I assume the first perspective I'm exposed to in a story is the protagonist's, so that's part of the reason why I use it more. Stories are typically meant to be a hero or heroine's journey, so it's helpful to follow their perspective to understand how the events in the story change them and help them develop. Antagonists generally don't develop at the same rate or fail to change; however, there are stories where the line between hero and villain can be quite thin. (Some stories make an antagonist from another story the hero, so you see actions from his/her perspective.) Another reason for not writing so much from the villain's perspective is to keep some of his/her actions secret so as not to spoil a twist. Sometimes I do want to show some of a villain's plans, but their scenes are far fewer and less extensive than the hero/ine's.

Whose perspective do you like to write from? Is there a perspective you prefer to read? Feel free to share your thoughts in the comments.
Posted by Sandra Ulbrich Almazan at 12:00 AM 7 comments: