Posted by Sandra Ulbrich Almazan at 9:59 PM No comments:

I've been at home with Alex all this week. He has RSV, a respiratory virus that's very contagious, so daycare insisted he not come in for a few days. He started getting sick on Saturday, when he had several coughing fits that led him to lose his bottle a couple of times. We still brought him to Simbang Gabi, a special Mass with Filipino touches at Eugene's family church. Alex started crying shortly after we arrived, so I spent most of the service in the bathroom trying to get him to eat. (I haven't converted and don't plan to, so missing the Mass doesn't bother me.) We noticed later that he was wheezing, and it continued on Sunday. So we brought Alex to the doctor Monday morning, and I've been home with him since.

Despite being sick, Alex has generally been in a good mood. Unfortunately, today he was really fussy; I think it could be due to teething. Hopefully he will get his two front teeth for Christmas! I haven't done too much besides tend and play with Alex and goof off on the computer with a new game. Today, at least I got to go to the grocery store while Eugene stayed home with Alex; it was nice to get out for a while. I also stopped by our house to drop off a few things and check out the paint job. The painters still have to finish a couple of rooms upstairs, but the downstairs looks much better now. I can hardly wait until Saturday, when we have some new furniture delivered. Maybe after that we can accelerate the moving a bit.
Posted by Sandra Ulbrich Almazan at 10:07 PM 2 comments:

Remember a while back when I posted about my late night trip to the ER and follow-up ultrasound? Well, I finally got to talk to a doctor about the ultrasound. Yes, it's my gall bladder, and they recommend having it removed. So I've scheduled the surgery for January 9th. Let's see if I last that long; I had another attack last night, even worse than the previous ones. I didn't bother going to ER because I didn't want to put Eugene and Alex through another sleepless night like that one--and if I'm going to lie awake for three hours anyway, I may as well do it at home, where I'll be more comfortable. The surgery doesn't sound too bad, though I will have to stay overnight at the hospital. The sad thing is I'm looking forward to that; at least that'll be one night where I won't have to get up between 1 to 3 in the morning to provide Alex with "crib service." Recovery is expected to last up to a month. I won't be allowed to lift anything heavy, which will be a problem when I bring Alex to day care in his car seat.

Finishing up my novel is going more slowly than it did in November. Since we're trying to move and getting ready for Christmas, I'm writing mostly during my lunch hour, and this week I only did it a couple of times. Still, I'm making progress with the plot, as both of my heroines are in a bind. It'll be fun figuring out how to get them out of it.

As for the moving, it's going to take a while yet. At least most of the books are packed. But we still haven't figured out what colors we're going to use.
Posted by Sandra Ulbrich Almazan at 9:48 PM 1 comment:

The Exterior of the House

I couldn't figure out how to blur out the address, so that's why I made the picture smaller than usual. But this should give you an idea of what it's like. Too bad I didn't think to take pictures of the kitchen. Maybe I'll do that once we're all settled. 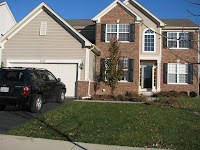 The Christmas Party That Wasn't

Ever since I started working at my present job, I've been part of the Party Planning Committee. I do it because...well, most of my other co-workers won't. I've helped plan the open house we hosted when we moved to our current location, and I've been a part of planning the Christmas Party (now called the more-PC Annual Company Dinner) for several years.

This year it was going to be a grand affair, with our budget more than what we've spent before. We found a very fancy restaurant (they have baked Alaska on the dessert menu!), reserved a private room, and set up a several-course dinner featuring several different types of appetizers, a choice of entrees, and a dessert platter, with the menu custom-printed for us. We were even going to cover valet parking.

Then...the first winter storm of the season came through the Midwest today.

It took Eugene twice as long to get home as it normally does. Even going to the grocery store with Alex was hazardous (and I don't think he was too excited about experiencing snow for the first time). My parents were planning to come down from Wisconsin to babysit Alex while Eugene and I went to dinner, but obviously that was out of the question. So Eugene said he would stay home with Alex. That left me with a dilemna: should I drive to the party by myself or stay at home? Although I felt guilty about it, I decided it was best to stay home. If the main highway Eugene took home was slick, how bad would local roads be? I felt guilty knowing the fancy dinner would go to waste, though. But then my boss called, checking to see what our plans were. It turned out that only three people would be able to make it, so I doubt the dinner (which was scheduled to start at 8:00 p.m.) went on at all. I'm sure the restaurant will charge us full price anyway; they reserved the room for us, so they won't be able to make any money off of it tonight otherwise. In a way, it's too bad; I doubt we'll be able to reschedule anything. But I have to admit I'm glad to be home with my family, in casual clothes instead of worrying about what to wear (most of my clothes are in storage, so it would have been either a summer dress or black jeans with a nice sweater), baking cookies, copying music to my computer, and just relaxing in general. And I suppose in the long run, it's better for my company if we all show up Monday morning in one piece.
Posted by Sandra Ulbrich Almazan at 8:12 PM No comments:

And Our Next Project Is....

Moving into our new house.

That's right; we closed on a house yesterday. (I took off from work early, so I didn't get to write during lunch. Instead, I brought my laptop along and wrote on the way to and from the closing.) We actually had the offer accepted back in October, but we didn't want to say anything until we had the keys in our hands, just in case the deal fell through.
We still need to paint and pack before we can move in, so it's going to be a while yet. In the meantime, here are a few pictures of the interior. (I have a couple of the exterior, but I need to figure out how to cover up the address. BTW, one of the regular readers of this blog will get a kick out of the name of the street. You'll find out more once we send out the new address.) 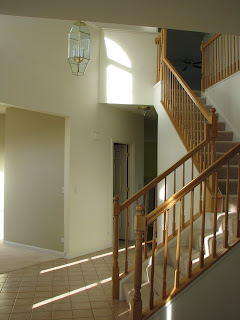 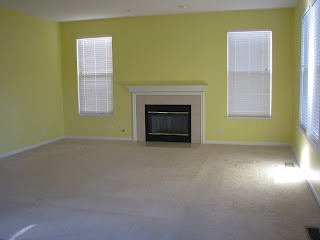 The family room. This is one of the rooms that needs repainting -- the yellow is much brighter in person! 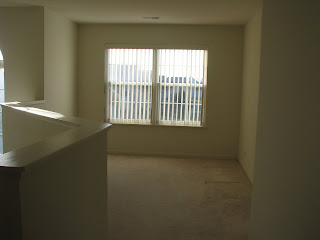 The loft, where my new office will be.
Posted by Sandra Ulbrich Almazan at 12:06 PM 2 comments: