Have a Holly Jolly Jawa! 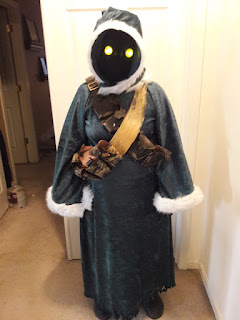 I promised you I'd share my "Holly Jolly Jawa" costume with you today, so there it is. The normal Jawa softparts (robe and hood) are made with brown weathered monkscloth. I made new versions with green velveteen (which is much easier to work with than the monkscloth) and trimmed them with faux fur. The rest of the costume is the same as what I'd normally wear. I did wear this in a parade last Friday night, but I don't have any good pictures from the parade. Hopefully I'll have at least one more chance to troop in this costume before the holidays are over.
Posted by Sandra Ulbrich Almazan at 12:00 AM 2 comments:

I'm not going to list every single project I've started or I want to start, as that would be rather tedious. I do have a couple of quick updates, though:

1. I finished the rough draft of one of my short stories. The working title (which is already the third one I've given this story) is currently "A Shawl for Janice." We'll see if I change the title again during revisions.

2. I'm nearly done crocheting a poodle. The "Bare Naked" version is below. Hopefully she'll look more poodle-like after I add lots of loops for fur: 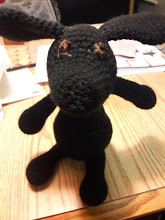 3. Dryads to Discover hasn't quite reached 50,000 words yet, but I expect to before the end of the month.

Although it feels like the holiday has already started, I do have to work tomorrow. Whether you're working, traveling, or staying home this weekend, I hope you have a good one. Next week, I'll show off the Holly Jolly Jawa costume I made for a parade this Friday.

It feels like it's been a while since I posted an update. Here's a quick rundown of what I've been up to (besides the usual work and family stuff):

Writing: I'm closing in on 50,000 words for Dryads to Discover, but since I started it last year, it definitely doesn't count for NaNoWriMo. I've temporarily set it aside to work on a short story for an anthology. By the time this post goes live, I should be over 2,500 words on that. The submission period for this anthology opens 1/1/19, which is hopefully enough time for even this slow writer to finish the story. However, there's a second anthology that opens around that time that I also want to write for. I have an idea for that story, but I need to do more research before I can crystallize my idea into words. After that, there's just more projects all the way down.

Sewing: I finally managed to finish the holiday Jawa costume for a special parade Thanksgiving Day weekend. Sorry, no pictures until after the parade. I may try making a dress out of the leftover material, but it would have to be a simple one. I also need to make a second set of normal Jawa robe and hood to replace the one I've used for over three years. At least after that's done I should be able to start the Jedi costume. It would be nice to have that for Celebration.

Crochet: I still have a few projects that I need to finish, including a custom Wookie, Spiderman, and a poodle. I did make a green Porg to help celebrate the holidays: 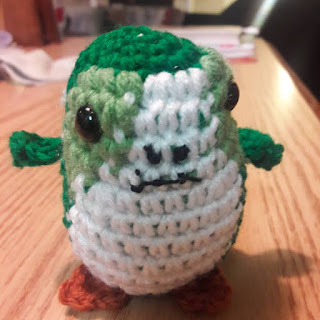 I guess by now you shouldn't be surprised that I have yet another long list of things to crochet once I finish with my current ones. At least I manage to keep myself occupied!

I have a three-day weekend coming up since my son has Friday off, so hopefully I can make progress on a couple of things. I'll let you know more next week.
Posted by Sandra Ulbrich Almazan at 12:00 AM 1 comment:

Our hosts this month are Ellen at The Cynical Sailor, Ann V. Friend, JQ Rose, and Elizabeth Seckman.

This month, we've been asked to answer the following question: How has your creativity in life evolved since you began writing?

My life has definitely changed a lot since I began writing over twenty years ago, but I'd say other factors besides writing have definitely influenced my creativity. One major life event that increased my creativity was becoming a mother. Although motherhood takes up a lot of free time, it also exposes me to different interests and activities that I wouldn't have discovered on my own. For instance, after taking my son to bouncy houses when he was younger, I used one at the setting in my short story "The Mommy Clone." When he became interested in Star Wars, our whole family got into Star Wars costuming, which has led to me learning to sew.

Other creative hobbies have come and gone over the years. I taught myself how to crochet in my twenties; among other things, I made a ring bearer's pillow and a baby outfit. Then I forgot about crochet for a while until the end of 2016. I found a pattern to crochet a "pussy hat" for the Women's March and ended up making two. From there I just kept on going. I currently found a niche  in making geeky amigurmi with Star Wars characters, though I'm expanding into other fandoms and other crochet projects. Most of my crochet is done using patterns someone else designs, though sometimes I modify the pattern. Eventually, I want to create my own designs, possibly to sell.

How has your creativity changed with your writing? Feel free to share in the comments.