Alex and I are sick.

I first noticed it Thursday morning around midnight, when I fed Alex. I noticed he was breathing heavily but thought he didn't have the bottle nipple positioned correctly. But then at the next feeding, Eugene noticed the congested breathing and coughing too. The breathing seemed better when it was time for me to leave for work, so I brought Alex to daycare. At work, I called the doctor's office and on their advice took him in. He doesn't have a fever or an ear infection (though when they cleaned his ears he cried much longer than he did for his shots), so that's good. The doctor recommended against medicating him at this age, so we're just treating him with a vaporizer and chest rub. Alex is quieter than normal, but he still smiles and wants to play. I feel for him when he coughs and sounds congested, but all we can do is comfort him and tough it out. He'll have many more colds and illnesses, I'm sure.

As for me, I hope Alex doesn't have my symptoms, which include a headache, chills, and a sore throat. I'm not sure who gave it to whom, but hopefully the antibodies in my milk will help him recover faster.

We were planning to go to Lynfred Winery's Octoberfest this weekend, but with Alex being sick, we'll just have to forego it this year. He's too young for a stein anyway. ;) But it is a shame being sick on one of the last nice weekends of the season.
Posted by Sandra Ulbrich Almazan at 9:17 PM 2 comments:

e
I've been meaning to blog for a few days now, but it's been hard to find the time. Alex doesn't go to sleep until 8:30 or 9:00, and some nights we don't get to have dinner until after that. So there's not much free time here. Last Thursday, as I was tele-experimenting and doing household chores, I thought to myself that I'm living the life of a Victorian housemaid. I've read somewhere that they would work from 5:00 a.m. to midnight. It hasn't been quite that bad for me, but only by a few hours. Hopefully things will get easier as Alex gets older (or gets better about falling asleep when he needs it).

It hasn't been all work and no play, however. Yesterday we went to a friend's baby shower in Chicago. Alex went too, of course, and he and two other babies were the stars of the show. Eugene made his (well, Paula Deen's) mile-high apple pie. It calls for two dozen apples, but he could only fit twenty of them into the bowl he used to stack the apple layers. What a shame. ;) After the shower, we visited Millennium Park and took pictures of Alex by the Bean. Here's a shot: 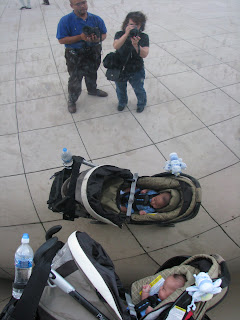 Today we ran a couple of errands (such as spoiling Alex with toys and new clothes at Babies R Us) and visited Eugene's family. While we were there, Alex grabbed a set of toy keys and waved it around. It's always cool to see him do something new.

Writing: I haven't done much, but I've thought of a new opening for Lennon's Line (I mean, Thine Own Self.) I like the new first line; it's the rest of the paragraph that's eluding me.
Posted by Sandra Ulbrich Almazan at 10:06 PM 3 comments:

I've survived two weeks of being a working mom. The mornings are hectic, as Eugene and I take care of Alex and get all the things he needs for daycare ready. Then I have to hurry off to the daycare to drop him off. He cries in the car, but most of the time he settles down once we get there.

In some ways, it's nice to be back at work. It's stimulating, and I get to pump and have a full lunch hour all to myself without worrying about Alex. Not much has changed over the summer, though there are now four people in the lab. (The summer intern decided to stay on longer.) This means we have to be more formal about reporting on our projects, and we're also having lab meetings--with treats! I keep busy, but I still think about Alex when I have a chance.

The evenings have become...interesting. Alex smiles at me when I pick him up, and he seems to be doing well at the daycare. But once he gets home, it doesn't take him long to start fussing, and he does it off and on until he goes down for the night (around 8:00-8:30). I think he may be overtired, but he forces himself to stay awake to be with Mommy and Daddy. It's nice to know he wants to be with us, but he needs his sleep. The problem is getting him to sleep on his own--and to stay asleep once we put him in the crib. Alex naps well at daycare, but he won't nap on the weekends, and he's definitely overtired. I'm afraid we'll have to resort to letting him "cry it out" so he learns to sleep on his own. In the meantime, we don't get to eat until after Alex sleeps, so it makes for a long evening.

Although the past couple of weekends have been gorgeous, we haven't been able to do much because of Alex's fussiness. Hopefully we'll be able to help him get over that. And no, I haven't done any writing either, not even during my lunch hour. I'm too drained to write, anyway. Probably the best thing to do is wait this out and remind myself it'll get better eventually.
Posted by Sandra Ulbrich Almazan at 10:36 PM 1 comment:

It was a pretty busy weekend for us. Eugene took Saturday off, so he had all three days free, which was nice.

We spent most of Saturday baking an apple pie. Actually, I should say Eugene did, as he did about 99% of the work while I took care of Alex and did a couple of other things. Eugene tried a new recipe this time, one from Paula Deen that required twenty-four apples. He wound up using only twenty, but it still was a monster pie. In order to stack up the Tower of Apples, he layered thin slices of apples in a stainless steel bowl, which he then inverted over the pie crust. After it was done, he coated the top with carmel sauce and pecans. All of this and the strusel (?) filling made for one delicious pie.

So what was the reason for Eugene making a mountain of pie? One of our friends was celebrating her birthday Saturday night. We met her and several other people at a bowling alley. We brought Alex along as well. In retrospect we should have had my parents come down to babysit, as this bowling alley doubled as a club complete with music that was TOO DAMN LOUD. Call me old school--call me old even--but when I get together with people, I like to be able to hear them without having to shout. Alex tolerated it better than I expected as long as someone was holding him. Eugene kindly took charge of him so I could bowl. I used to bowl once a week with some of my co-workers at my previous job, but that was five years ago. I started the night with a scoreless frame, but I ended up with scores of 69 for the first game and 112 for the second. Ironically enough, I did better after ordering the Gutterball cocktail. For Alex's sake, we wound up leaving early.

Sunday afternoon we went to the Chicago Botanic Garden briefly, but again Alex wasn't quite up for it. We fed him, but he still fussed until we got back to the car, where he fell asleep. It was just as well we left a little early, as we had plans to get together with a couple we'd met in our birthing class. (See my Babies in Stereo post from earlier.) We grilled dinner and talked babies for several hours. It was nice seeing them again, and we may get together with them again later this month.

Today, after doing some chores around the apartment, we visited Eugene's parents and had another grillout. They hadn't seen Alex since the christening, so naturally he was the star. He was fussy again, but this time it seemed more related to hunger and to doing tummy time. (Alex gets frustrated when I put him on his stomach. It's supposed to help him develop his neck and arm muscles, but he screams more than he lifts his head.) At least he fell asleep (hopefully) for the night when we arrived home.

This is a bittersweet day for me; tomorrow I go back to work and put Alex in daycare. It's going to be a bit strange being on a regular schedule again after three months away. Of course, I'll also be undergoing "Alex withdrawl." It's a shame I have to spend so much time away from him just when he's really starting to notice things. I think ultimately we'll all be fine, but it'll be an adjustment for all three of us.
Posted by Sandra Ulbrich Almazan at 10:25 PM No comments: