While I was cleaning my office last week, I came upon a trove of sticky notes full of story ideas, haiku, and other odd thoughts. Many of them I'd forgotten about. Some of these notes are for current series, while others are for story ideas that I haven't done anything with. I've been trying to declutter, so instead of keeping them, I transcribed them into a Word document. I have a bunch more to finish. I suppose there are plenty of apps people can use instead for capturing thoughts on the go. Perhaps when I upgrade my phone to one with more memory, I might be able to use of of them. In the meantime, here's an old haiku on one of those sticky notes that fits the topic:

So many boxes.
Things I used enough to save
Now they’re forgotten.

How do you organize your story notes? Do you keep them on paper or in electronic form? Feel free to share in the comments.
Posted by Sandra Ulbrich Almazan at 12:00 AM 2 comments:

Email ThisBlogThis!Share to TwitterShare to FacebookShare to Pinterest
Labels: writing

What Makes a Story Memorable?

I subscribe to one of Book Riot's newsletters. A couple of weeks ago, they linked to an essay discussing "lifeboat thinking," stories that are thought experiments about who is worthy of survival in a given situation. One classic science fiction short story that illustrates this type of thinking is "The Cold Equations" by Tom Godwin. If you've never read it (I just read it after this discussion) you can find it here. This essay does a good job of analyzing it. Although the essay has over two hundred comments, it's worth going through them as well. Spoilers will be posted in the next paragraph, so if you haven't read the story yet, I recommend doing so now and reading the essay and comments later.


OK, if you're still with me, "The Cold Equations" is a story about a spaceship pilot who finds a stowaway on his ship. The pilot is on a desperate mission to deliver medicine to a group of explorers, but his ship doesn't have enough fuel to land safely with the weight of an extra passenger. Corporate rules are that stowaways are to be shot immediately and tossed out the airlock; since the passenger is a teenage girl named Marilyn who just wanted to see her brother, she's given an extra hour of life before the cold equations of the title force her to sacrifice herself.

Editor John W. Campbell really wanted the tragic ending; he made Godwin rewrite the story multiple times because the author kept finding a way to save the girl. Despite the rewrites, the story has received a lot of critique since it was published in 1954. Other than a sign, there are no security measures in place to prevent a stowaway from coming onboard. (I work in Quality Assurance, where we deal with corrective and preventative measures to ensure food safety. One would expect starship designers to use similar practices.) You'll see several security measures suggested in the comments sections of the second essay I mentioned earlier. Despite all the editing, there are still some internal inconsistencies within the story. At the beginning of the story, Marilyn thinks all she has to do is pay a fine to make up for stowing away, implying that she's rich. By the end of the story, we learn her family doesn't have much money. There's also another point that I haven't seen anyone discuss yet. If the pilot only has enough fuel for a one-way trip, then he's forced to remain with the group of explorers he's helping until the end of their mission. What if they run out of supplies? Will the pilot be killed due to other cold equations?

Despite the problems with "The Cold Equations," the story has been adapted and anthologized many times since its original publication. What makes it so memorable? Commenters suggest that the tragic ending makes the story memorable, particularly since when "The Cold Equations" was published, science fiction stories were about solving problems with science. For me, the worldbuilding flaws are frustrating, and I want to see better security measures put in place. Character gender may also be a factor. Stowaways in this setting are normally male criminals, not naive young women. The death of a young woman may anger some readers and secretly satisfy others. Many factors make this story memorable, and they may vary from reader to reader.

What's one of the most memorable stories you've read, and what makes it memorable for you? Feel free to share in the comments. 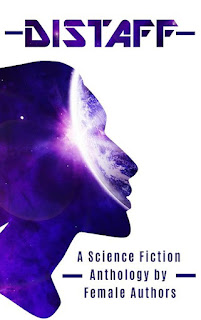 DISTAFF: NOUN
A staff used in spinning.
Of women and women’s work.
An anthology of women’s stories woven through time and space.

In 2018 a crack team of women sci-fi writers, all members of the sffchronicles community forum, came together to write an anthology. Distaff is the result. Join us as we share stories of people, of science and exploration, and enjoy the words we weave.

Further Info:
Distaff is a Science Fiction Anthology featuring nine short stories by female identifying authors. The anthology began in 2018 on SffChronicles.com, a webforum devoted to the Science Fiction, Fantasy and Horror genres. Like the site that gave birth to the idea, Distaff encapsulates the broad range of the Science Fiction genre. The anthology shrugs off the negative connotations of the word Distaff and embodies the positive aspects of what women can achieve when they pool their talents. Distaff is entirely ‘of women’s work.’
Distaff contains nine stories from new and best-selling authors.

It's hard to believe we're in the last full month of summer, isn't it? Welcome to the sweltering month of August. Rather than think about the heat, let's talk about writing and the Insecure Writer's Support Group. You can learn more about them on their website and Facebook page.
This month, our hosts are Renee Scattergood, Sadira Stone, Jacqui Murray, Tamara Narayan, and LG Keltner.

Here's our question for this month: Has your writing ever taken you by surprise? For example, a positive and belated response to a submission you'd forgotten about or an ending you never saw coming?

My characters tend to take me by surprise by going off in directions I hadn't foreseen. For example, in both my Catalyst Chronicles and Season Avatars series, I have secondary characters that I paired up with someone else but then fall in love with the main character. That gets very awkward, especially when the main character doesn't reciprocate. I know how to work it out in both series. In the case of the Catalyst Chronicles series, I've been blocked on a story that comes between Twinned Universes and the next book in the series, which I plan to call Catalyst in the Crucible. At least Catalyst in the Crucible will resolve the romance aspect for some of the characters. (Still not sure if some of the characters will get a match--or if they need one.) You'll have to read the entire Season Avatars series to find out what happens to my characters, but I have further adventures planned for them in the spinoff series.

Have your characters surprised you? Feel free to reply in the comments.
Posted by Sandra Ulbrich Almazan at 12:00 AM 6 comments: