OK, I'm a little slow on blogging this week. This picture was taken on Sunday. Eugene finally made good on something he's talked about for a while--shaving his head. Now Alex has more hair than his dad. ;) 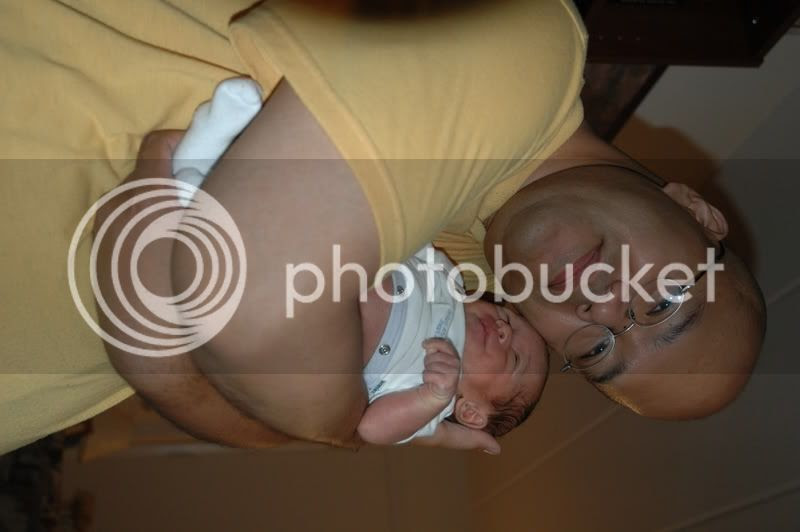 My friend Heather came over to visit today. She wanted to meet Alex, so it was a good thing he was up when she was here. He was pretty well-behaved too (normally he only cries if he needs a diaper changed or if he's hungry). We talked about writing for a while, got a carry-out dinner from a local restaurant, and watched Finding Nemo. She also brought over dessert: a kosher cake with pineapples and strawberries. Unfortunately, the cake got a little battered (rimshot) during the drive over here, so we jokingly referred to it as kosher mush. It was still pretty good, though. Hopefully we'll have a chance to get together again before she leaves in July.
Posted by Sandra Ulbrich Almazan at 10:56 PM 1 comment:

DELAVAN, Wisconsin (AP) -- A domestic dispute erupted into a mass killing in southern Wisconsin, leaving six people, including two infant boys, shot to death, and a 2-year-old girl with a gunshot to her chest.
A prosecutor said late Sunday no one was in custody but that police weren't looking for a suspect and no one else was in danger. Officials often use such language when the shooter is among the dead.
"What we have is a complicated death scene and we're investigating all the possibilities," said Kevin St. John, a spokesman with the state Justice Department, which is leading the investigation. (Watch police and neighbors describe what they saw and heard )
Walworth County District Attorney Phillip Koss said the shooting was part of a domestic dispute, but he wouldn't elaborate until autopsies were completed and the crime scene was fully evaluated.
Officers, responding to a report of shots fired, stormed an A-frame duplex Saturday night with weapons drawn, kicking in the door, neighbor Richard Heideman said. He saw two paramedics go in behind them and come back out minutes later.
"That's when I knew everybody was dead," Heideman said.
As the bodies were wheeled out, one onlooker dropped to his knees on a neighbor's lawn and threw his hands to the sky in prayer.
The 2-year-old girl was found in a nearby van, seriously wounded. A male family member who escaped the shooting was helping investigators.
Authorities have not released the victims' names, but Kay Macara said her 19-year-old daughter, Vanessa Iverson, was among the dead.
With tears in her eyes, Macara said her daughter went to the apartment the previous night to visit friends.
"My child," she said. "I want answers."
Also in the house during the shooting were the twin infants, their parents, and the mother's sister and her husband, said Sarah Iverson, Iverson's sister-in-law.
The 2-year-old sister of the twins, Jasmine, was in serious condition at University of Wisconsin Hospital in Madison.
The father of the children, 22-year-old Ambrocio Analco, was one of the dead, said Marco Pastrana, Analco's cousin. He said the boys were 2 to 3 months old.
Monday morning, a cluster of teddy bears, stuffed bunnies, a dinosaur and candles stood under a tree outside the duplex. The landlord, Duane Brellenthin, said two sisters rented the upstairs apartment. He declined to name them, deferring to police.
He said they'd lived there about a year and a half, and he'd never had problems with them.
Pastrana said Analco no longer lived with the children's mother. Analco left Pastrana's house Saturday night to drop the kids off with her at the duplex, Pastrana said.
"It came to my mind that this was not true," Pastrana said. "But when I came here I went to talk to the cops and they tell me that he was dead, his kids were dead and one was in the hospital."
Neighbor Leandra Mena, 65, said she heard what she thought were firecrackers coming from the house around 10:30 p.m. Saturday.
"I thought it was firecrackers because it's so close to the Fourth of July," she said.
Police cordoned off two blocks around the duplex for most of the day. On Sunday morning neighbors, some still bleary-eyed, clustered on the sidewalks, watching investigators move bodies out of the house.
Tina McKinnon, 37, lives about a block away and said there was never any commotion at the house. "The children were very pleasant," she said.
Delavan, home to about 8,000 people, lies in the farm fields and woods between Janesville and Milwaukee. The P.T. Barnum Circus, "The Greatest Show on Earth," was founded in Delavan in 1871, and statues of circus animals decorate the town square.


It's a little strange seeing a sleepy town like Delavan make the national news--and I certainly didn't want to see it for this type of story. At least I don't recognize any of the people mentioned here. My sympathy goes out to the family, and I hope the little girl recovers.

I spent my teenage years in Delavan, though the town has developed since then. Back in my day, Delavan only had about 5,000 people. Since I moved there in 1982, a dog track went up (though I think it's now a bust), and lots of new stores have sprung up too. There's also a much greater Hispanic population now; when I was in high school, there were only a few token minority students.

I still visit Delavan on occasion because my friend Liz lives there. I wonder what she and her family make of this story.
Posted by Sandra Ulbrich Almazan at 12:46 PM 1 comment: 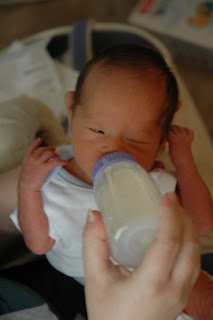 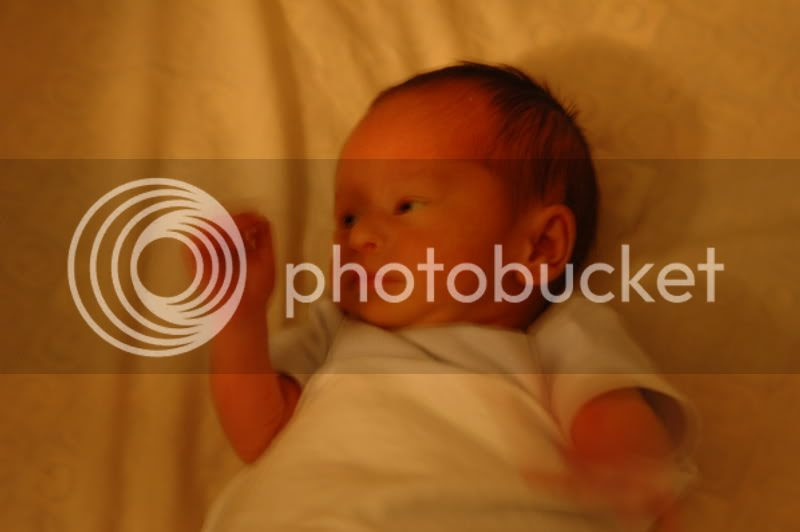 How dare Mommy ground me to the bassinet? 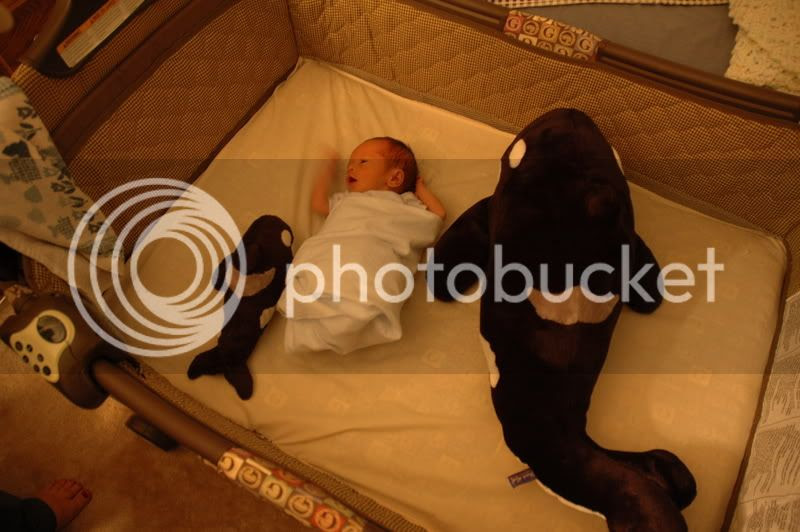 It looks like my last post here was on May 30th. That's ironic, given how much has happened since then....

I have had blood pressure issues during the pregnancy, so my doctors monitored me closely to make sure it didn't progress to pre-eclampisa. At my 5/25 visit, my blood pressure was quite high initially, so I had to do a 24-hour urine collection over the weekend. I dropped the sample off on Tuesday the 29th, had some bloodwork done, and scheduled a C-section for 6/11 due to Alex being breech. The next day, I visited the perinatologist for the ultrasound of the week. Everything looked good during the ultrasound itself. However, when the doctor walked in, he said, "You timed it just right." It turned out that my liver enzymes were too high and that I had finally developed a mild case of pre-eclampisa. Since I was at 37 weeks, he wanted the baby to come out within the next 24 hours. So instead of using the rest of the day to take care of a few things, I wound up in Labor and Delivery. (The doctor's office was in another wing of the hospitial, so we walked over to the main entrance and then Eugene took me in a wheelchair the rest of the way.) They checked me in, had me change, and put me on an IV. Meanwhile, Eugene had to go home to fetch some things (good thing we had the essentials already packed). Since I had had lunch, we had to wait until the evening for the operation. We made some phone calls, and I watched TV and read a little, but waiting was very difficult, to say the least. Finally, they prepped me and brought me into the OR. It was so cold in there I started shivering. That made me worry a little about the spinal (in case it didn't go in the right spot), but it wasn't an issue. I have to admit I did feel a bit depersonalized as they positioned me and drew the sterile curtain over my body. Good thing Eugene was there to hold my hand and stroke my hair. After the spinal set in, I could still feel my feet. I mentioned to the doctor, who then asked if I could feel her pinching me. I couldn't. They proceeded. I didn't feel anything except some pressure as they drew out son out. He came out at 8:35 p.m., screaming, which was a good sign--and very amazing to hear. His Apgar scores were 8 and 9. (These are scores used to determine how well a baby is doing.) Weight was 5 pounds 2 ounces; length was 18.5 inches.

As the doctor was sewing me up, she showed Eugene my uterus. Apparently mine is heart-shaped, which explains why our son never turned head down. Any more children we have will also have to be born by c-section. Eugene got to go with our son to the special care nursery (all babies born by C-section go there automatically) while I recovered. I attempted to nurse as soon as they brought our son to me. However, I couldn't keep anything down, even liquids, until the next day, when they finally stopped my IV. I stayed in the hospital until Sunday, June 3rd. During this time, we got to know our son a little better and decided to name him Alexander Aurelio, after his grandfathers. Of course the grandparents visited, and so did a couple of our friends. By Friday, I was already feeling much better, but it was (and still is) painful to get into and out of bed, sit down, or do other things. But it's worth it to have our son.

Here are some pictures Eugene took while we were in the hospital:

There are a couple on his blog as well.
Posted by Sandra Ulbrich Almazan at 7:54 PM 5 comments: