It's not often that I get to leave the lab for other work-related duties, but today I did. Last week, I received an e-mail about a free seminar about managing your chemical inventory. It sounded like it might be useful, so I got permission from my boss to register, then obtained directions from Mapquest. The seminar was being held in a special science and technology complex in Skokie, near where Eugene grew up. Unfortunately, the exact address for the complex wasn't available from Mapquest; they gave me instead a range of numbers similar to that address. I printed out the directions anyway, then showed them to Eugene. He knew of the complex and thought the directions would work. He also pointed out to me that I would have to take one of the Chicago exits off of the highway (detour due to construction). Lovely; between that and the commute during morning rush hour, I started to dread this trip.

Eugene had to leave extra-early this morning, so he did as much as possible (e.g., prepare bottles for day care, fill out the sheet) to help me before he left. Alex wound up sleeping in; I had to rouse him to change him for day care. He wasn't ready to eat before we left, so, feeling guilty, I left him an extra bottle for breakfast. Then I got on the highway.

The highway portion of the journey wasn't as bad as I feared; traffic moved along steadily, and even though it was sunny, the sun didn't cause delays either for east-bound traffic. Even getting off of the highway wasn't bad, and I didn't have to venture into the city itself. In fact, it was easy to follow the directions, and I was on time--until they led me to a community college. I knew that couldn't be the place, so I tried driving around it to see if the street continued on the other side. No such luck. I drove around a bit more and came across the vet clinic where Eugene's dad works. I pulled in, thinking to get directions from my father-in-law. But he wasn't in; the clinic was closed until Halloween.

By this time I was late. I called Eugene at work and on his cell, then explained the situation. He gave me other directions to the complex, but that didn't work out either. I knew I had to be close, though, as I could see some industrial buildings in the area. Finally I pulled into a parking lot and walked around until I found the right address. I was about 40 minutes late by the time I found the seminar. At least there was still time for tea and cookies.

As for the seminar itself? It was essentially a sales pitch for a software/scanner combination. You can print out labels with barcodes for your chemicals and then track them with the handheld scanner. It seems like a neat setup, but it's too expensive for our small lab. Ah well, maybe I'll get some ideas for something we can do on our own.
Posted by Sandra Ulbrich Almazan at 9:16 PM No comments:

It's been nearly three weeks (I think) since Alex and I got sick. We're both still congested, though I think I'm worse off than he is. I'm also beginning to wonder if I have a sinus infection. I have a headache that won't quit no matter how much Tylenol I down. Other people have it worse, I know, but this cold or whatever it is is pretty bad. If it's not better by tomorrow, I'll have to call the doctor.
Speaking of being sick, we almost didn't get to go up to Madison this weekend for our annual early Thanksgiving get-together with college friends. Alex had a slight fever Friday night. Luckily, we were able to bring it down with medicine, and since he was acting normally Saturday morning, we decided to go. We stopped first at a local pumpkin farm to meet with some other local families from a forum we belong to. Here's a photo of Eugene with Alex in his Halloween costume: 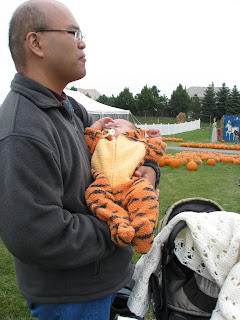 Alex handled the car ride up to Madison pretty well. He slept for the first part of the journey. We did have to stop and change him, but that didn't delay us too much. We went straight to the church where the dinner was being held. As always, there was a lot of food and a lot of fun. The kids, of course, provided most of the entertainment. As new parents, we spent most of the time sharing our experiences with the other parents in our group. We've definitely moved on to a new phase in our lives. Alex was quite vocal at times, and not in a good way. I think all the noise was too much for him. We gave him a bath when we got to the hotel, since baths seem to soothe him. We stayed in a nice suite complete with a microwave and mini-refrigerator for Alex's needs.
Sunday morning we had brunch with the gang before heading back. (The weather was too bad for going around campus. I guess we'll have to wait for next year to show it to Alex.) We visited my parents on the way back.
There isn't too much else to add, especially since I've been going to bed early for the last couple of nights. I did find this site which has some links to some cool videos on YouTube:
http://www.ready-set-bumbo.com/
And you can watch one of the videos here:
http://youtube.com/watch?v=j5dPMtuZsCw
Posted by Sandra Ulbrich Almazan at 9:33 PM 1 comment:

In case anyone needs proof I'm crazy, this is it.

I just signed up for National Novel Writing Month. If you haven't heard of this before, the idea is to write 50,000 words of a novel during the month of November. You're allowed to come up with notes and an outline beforehand, but you can't start writing the actual novel until November 1st. In order to meet the word quota, you have to average about 1,667 words a day. I'm lucky to make 300 words a day, and that was before Alex. If I get even a fraction of the way to the goal, I'll be amazed. But the idea behind NaNoWriMo (as it's abbreviated) is to focus on quantity, not quality. I'll need to change the way I write in order to make quota. Also, I'll have to bring my laptop to work and write on my lunch hour--something I told myself I'd do but haven't so far. Whether I succeed or not, at least this will give me some motivation to get writing again. I haven't done anything for a while (it's hard with a baby), and I feel the need to write. Besides, this gives me a good reason to stretch myself and work on something different from Paul Harrison or my Season Lords.

I probably shouldn't say too much about what I'm working on, but it's a fantasy novel, and the tentative title is Only an Owl. I'll be using the rest of this month for research and outlining.

Wish me luck with this new endeavor, and if I don't post much during November, you'll know why--I'll be saving my words for my story.
Posted by Sandra Ulbrich Almazan at 6:01 PM 1 comment:

Not Really Turned On Again

Last night was the Genesis concert. (I blogged about getting tickets for this show back in...oh, I don't remember what month it was. My memory is as sharp as a damp sponge these days.) It was at the United Center downtown, so it was a big pain getting there. Although Eugene got home early enough to pick up Alex, traffic for me was pretty heavy, even though I left right at 5:00. Then we had to pack up everything Alex needed and bring him over to Eugene's parents so they could watch him. Again, local traffic was heavy, and we got there later than we planned. We rushed through setting up the Pack-n-Play for Alex and giving the grandparents last-minutes instructions, then we dashed off for the concert. We worried on the way in that we'd be really late, but luckily the traffic wasn't too bad. We did have to grab dinner at the United Center, since we didn't have time to get some decent food elsewhere. I did have pizza--something I've been looking forward to since giving up dairy in July (we thought Alex might be allergic to milk protein, but so far he seems OK), but this was a disappointment. Ah well, I can always make my own za.

Anyway, we did make it to our seats in time for the official start of the concert, which was of course delayed. We had a decent view; we were on the first level. Still, it was much easier to see the band on the screens.

Phil had some decent interaction with the crowd; from time to time, he brought out a digital camera to take pictures of the audience. The music sounded good, but for some reason I didn't get into it as much as I did the first time I saw Genesis fifteen years ago. Part of it probably was being exhausted and sick and still wound up from dashing all around. Part of it too was thinking about our son and wondering how he was doing; both Eugene and I had our cell phones clenched in our hands, waiting for them to vibrate. And perhaps part of it was not being familiar enough with the early Genesis songs. They played a bunch I didn't recognize, and I waited in vain for "The Lamb Lies Down on Broadway." But even some of the songs I like, like "Domino," didn't get a strong reaction from the crowd. (Of course, we did have fun watching the drunks dance.) There were some good points, such as the drum duet between Phil and Chester Thompson. And I did get to hear one of my favorites, "Invisible Touch." But although Eugene and I did need the chance to have some couple time, I don't think we got our money's worth. Good thing we didn't pay for floor seating.

By the time we got home with Alex, it was about 1:00 a.m. (And yes, he still woke up in the middle of the night.) Gotta wonder how I made it through the day without caffiene.

P.S. Alex is still sick, but he seems to be doing better. His teacher at daycare said he was in a happy mood today, and his cough seems to be improving. Eugene picked up a humidifer for the nursery; hopefully that will help clear up his congestion.
Posted by Sandra Ulbrich Almazan at 10:32 PM 1 comment: