First, an update on Alex: we took him to a couple of doctors Monday to get opinions on how to handle his recurrent ear infections. We first saw an ear, nose, and throat specialist. He recommended surgery to insert ear tubes. The pediatrician suggested a few other things we could try first, such as removing dairy from Alex's diet and giving him a different type of antibioitic. So we switched to soy formula, which Alex seems to be taking well. Unfortunately, Alex wasn't able to tolerate the oral antibiotic, and he had to have more intramuscular injections. But at least he seems to be doing better, although he's still sensitive to loud noises. We bring him back for a recheck next week and will (no pun intended) play it by ear.

Now that Alex is improving, someone else in our family must get sick to keep the universe in balance. This time, it was Eugene's turn to visit urgent care. He has bronchitis -- again. I hope eventually everyone is healthy!

Yesterday, my dad came for a visit. He secured some of our bookshelves to the walls and also tried installing a safety gate. (We need something else to finish the job.) After that he played with his namesake for a while until he tried putting Alex down for a nap in his crib. That didn't work too well. But at least I was finally able to unpack some of my books. Seeing them again was like reuniting with lost friends. There's still more to unpack, but at least now I can work on my office area when time permits.

As for today, after we went to urgent care, we went grocery shopping, came home for a while, and then had dinner with my in-laws at a restaurant. They too were suffering from Alex withdrawal. He generally behaved OK, though he got a little fussy toward the end. We also discussed plans for Alex's first birthday party. It's coming up soon!
Posted by Sandra Ulbrich Almazan at 10:20 PM No comments:

Alex spent his first Easter in the hospital.

Alex has had several ear infections since January. We brought him to urgent care last Monday after a very fussy night and found out he had yet another ear infection along with a sinus infection. The doctor put him on Omnicef, a very strong antibiotic, and for a few days Alex seemed to be improving. Thursday Alex was very sensitive to loud sounds at daycare, and they even noticed fluid coming out of his ear. We brought him back to urgent care that night, and the doctor said his ear was improving. So when he had a low-grade fever Saturday, I thought it was teething and kept giving him Tylenol. Unfortunately, the fever got worse in the evening, and at 12:30 a.m., when it still didn't improve despite the Tylenol, we went to ER. According the doctor there, Alex did have another ear infection. Bloodwork showed Alex had an elevated white blood count, and that's why he had to be admitted to the hospital.

The pediatric ward was very quiet, since there was only one other child in the wing. It was nicely decorated, with murals on the walls, a playroom, and a gameroom/gathering room. Alex's room had a fold-out bed so parents could stay in the room, and the staff even brought in lunch and dinner for us. But it still sucked having to be there, especially when it meant we couldn't celebrate Easter with Eugene's family. We did bring Alex his Easter basket, which had a couple of stuffed animals, a couple of books, and a couple of toys. At least he really liked the giant, colorful glowworm. None of us slept well, if at all, while we waited for the doctors in ER. Alex was so overtired he couldn't fall asleep; he screamed no matter what we did. He finally got some sleep in the afternoon, after we carried him around the hospital wing. He also didn't eat very well. His treatment was a pair of intramuscular injections of antibiotics. He got the first one in ER and the second one in the evening, when we were finally discharged. We've spent this afternoon in following up with more doctor visits. Alex may have to have surgery if the ear infections don't clear up, but we're going to try a couple of other things first. I also hope that if spring ever actually arrives, Alex will stop getting sick.
Posted by Sandra Ulbrich Almazan at 9:29 PM 2 comments:

Synopsis Writing and Other Things

I haven't blogged much lately since I was busy with the synopsis writing workshop held through OWW's focus mailing list. If you're not familar with synopses (as I expect most of you are), they're summaries of a novel used to pitch them to agents and editors. They have to sum up an entire novel (which can be over 100,000 words) in just a couple of pages, all while being clear in conveying plot, setting, and character development. No wonder many novelists dread doing them. For this workshop, we started off by reading some "how-to" articles and sample snyopses, then writing one of our own. I wrote one for Thine Own Self, previously known as Lennon's Line. Three people commented on my synopsis. Unfortunately, I got so swamped with work and taking care of Alex (as usual, he's sick) that I haven't had a chance to revise and resubmit my synopsis. I'll probably post it on the OWW workshop once I've revised it.

In other writing news, I'm rewriting the first couple chapters TOS, trying to make my main character more sympathetic. I also signed up for a panel at WisCon, but it'll be a while before I learn if that goes through. Even if it doesn't, I'm participating in a rapid-fire reading with BroadUniverse. Also, the website for the anthology A Firestorm of Dragons is up; this anthology includes one of my short stories. I'll have to post a link to the website when I have more time.

Not much else going on otherwise, just trying to keep up with work and the house and everything else I have to do. I need to split myself into two or more people to get everything done!
Posted by Sandra Ulbrich Almazan at 10:13 PM No comments:

Email ThisBlogThis!Share to TwitterShare to FacebookShare to Pinterest
Labels: firestorm of dragons, writing

I'm a little behind reporting on this, since it happened Sunday night. My cousin threw a surprise birthday party for my aunt and uncle. Unfortunately, my parents couldn't make it since my mom is sick. Alex handled it pretty well, given that it interfered with his bedtime. Here are a few pictures: 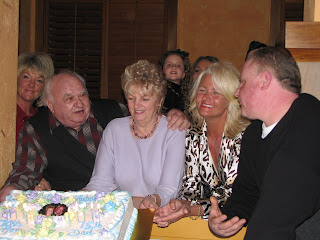 My uncle and aunt are in the center, flanked by my cousins Sylvia, Ilonka, and Dirk. Sophia, one of my flowergirls, is visible above my aunt's shoulder. 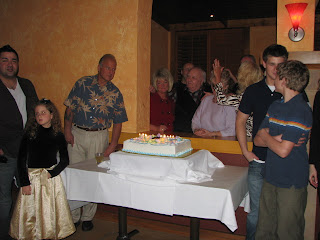 More of the family, including my cousin-in-law and some of my cousin's children.
Posted by Sandra Ulbrich Almazan at 10:30 PM No comments: