Yesterday was my 50th birthday. To mark the occasion, I decided to rewrite the lyrics to Billy Joel's "We Didn't Start the Fire" to cover events of the last fifty years. There are five verses, so each one is dedicated to a different decade. (I used Wikipedia to look up key events, people, and things from each decade.) Although I like to rewrite lyrics to songs, this was one of my more challenging projects. Billy Joel manages to make his lyrics work by incorporating internal rhymes into every line. Not all of my lines rhyme that well. The syllable counts for each line don't sound consistent to me, though I could be mishearing them. Perhaps I'll come back to this at some point to tweak a few lines. In the meantime, I hope you enjoy this musical trip down Memory Lane.

9-11 don’t forget, Facebook on the Internet
Climate change, anthrax, we all wear cargo pants
Harry Potter, civil wars, Pluto now is a dwarf
Bush, Obama, Merkel too, Come on back, Doctor Who
Housing bubble had to burst, earthquakes did their worst
Sequence genomes mice to men, Avatar and Eminem!

Chorus
Posted by Sandra Ulbrich Almazan at 12:00 AM 2 comments:

When I started indie publishing back in 2011, I promised myself I would keep at it until my next landmark birthday and then re-evaluate if I wanted to continue. That day arrives next week.

Like many people at the start of a new venture, I thought self-publishing success would be assured, and it wouldn't take me long to find fame and fortune. That didn't happen. I'm not a fast or prolific writer, and the stories I want to tell don't have the tropes many readers seem to want. I seldom sell books unless I pay for ads on the free/bargain book sites, and even the ads end up costing more than I earn. I earn more from selling short stories to anthologies than I do from my indie-published novels. Perhaps I should focus on short stories--if I still feel that writing is worth the effort.

Despite all the struggled, I'm determined to keep writing and self-publishing my novels. I improve my craft with every project, and it's possible future novels will hit the sweet spot between what I want to write and what readers want to read. I don't necessarily need to be a bestseller; if I can find a few thousand people who are in my tribe and get what I write, I'll do well enough. There are still so many stories I want to tell with my current and future characters. I can't let them--or myself--down by giving up. I already fulfilled one dream by finishing the Season Avatars series. There are still more dreams out there. Thanks to indie publishing, I can control what happens to my dreams.

Here's to another fifty years of reading and writing books. May the Muse be with me!
Posted by Sandra Ulbrich Almazan at 12:00 AM 3 comments:

If you're missing your favorite convention, there are online ones to compensate. Here are a few that I know of:

Quarencon2020: This is a new convention that's supposed to run from April 24th-April 28th. There's not a lot of information on the website yet, but there will be panels, workshops, contents, and vendors (I've applied to be one of the vendors.) I think it will be free.

WisCon: This one has gone virtual as well. As usual, it will be held Memorial Day weekend. It sounds like there will be a small fee to attend, but registration hasn't opened yet. I haven't attended for a couple of years, so I'm looking forward to participating. While I'll miss seeing my Madison friends and going around my beloved city, it might be easier to focus on the online con if there are fewer real-life things competing with it.

WorldCon (CoNZealand) will occur online between July 29th through August 2nd. The supporting price is about $46. I'm not sure if I'll register for this one yet, but guests include Mercedes Lackey. I was a big fan of her work when I first started reading fantasy, so it might be interesting to attend her panels. Obviously it won't be as thrilling as meeting her in person, but it's much cheaper and easier than flying to New Zealand, even under normal conditions.

Are you aware of other online conventions? If so, feel free to share them in the comments.
Posted by Sandra Ulbrich Almazan at 12:00 AM 3 comments:

Many book lovers feel that the physical format of the book should be protected at all costs. They always use bookmarks, store their books properly, and keep them pristine. I'm more interested in the content than the container. I often use unconventional things to mark my place in a book or leave it upside down. Sometimes (though not often) I even write in books. Here are a few books that I've used so much over the years that they're falling apart: 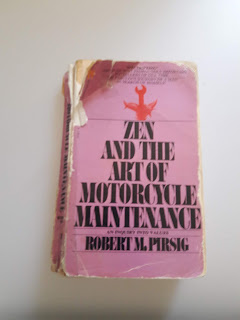 I've had this copy of Zen and the Art of Motorcycle Maintenance since high school. This book has the most annotations I've ever written in a single book. 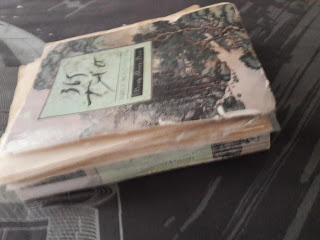 Every morning, I read a page from this book. I've been doing it so long that this is actually the second copy of this book. I think pretty soon I'll need to get a third copy. 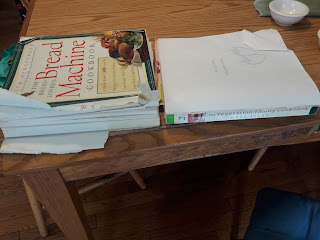 Cookbooks get a lot of use. I've had the bread machine cookbook for well over twenty years--and I'm still finding new recipes I want to try. I like the vegetarian cookbook so much I've given a copy to a friend. It might be time to replace that one soon too.

How do you treat your books? Are they in good shape, or are they falling apart like mine? Let me know in the comments!
Posted by Sandra Ulbrich Almazan at 12:00 AM 1 comment:

Email ThisBlogThis!Share to TwitterShare to FacebookShare to Pinterest
Labels: books

IWSG: How Are You Doing?

Our hosts for April are Diane Burton, J.H. Moncrieff, Anna at elements of emaginette, Karen at Reprobate Typewriter, Erika Beebe, and Lisa Buie-Collard.

The IWSG’s focus is on our writers. Each month, from all over the globe, we are a united group sharing our insecurities, our troubles, and our pain. So, in this time when our world is in crisis with the Covid-19 pandemic, our optional question this month is: How are things in your world?


I've already spent the last two weeks talking about how the pandemic has affected me and my family. We're fortunate so far in that we're still healthy and working. Things can always change, especially since we live in the Chicago suburbs, and there are a lot of cases in our area. At the beginning of March, we went to McCormick Place for C2E2; now, the convention center is going to become a makeshift hospital. It'll probably take between twelve and eighteen months before things settle down. All we can do in the meantime is take proper precautions and keep our spirits up. I'm still pretty busy with work and extra cleaning around the house, but I make time to read, write, crochet, watch TV or documentaries, socialize online with friends, and take an online class. (And yes, play games on my smartphone.)

How are you doing? What are your coping strategies? Feel free to share them in the comments.
Posted by Sandra Ulbrich Almazan at 12:00 AM 7 comments: