Today I'm hosting Joleene Naylor as part of her Children of Shadows blog tour. Please see below for an excerpt, further information about the book, and a chance to enter a contest.


Katelina told herself she’d misheard Ume’s final question, and with that denial managed to slip into dreams of burning light and running blood. Eventually the screams faded into darkness.

The wind was chilly and Katelina saw that she was standing in front of a lake. Snow was sprinkled on the ground around her feet and ripples danced across the surface of the water. The world was cloaked in night, but she had a sense of nature; trees and plants rustled and whispered. She could see the outline of a building hiding in the dark. A siren wailed low and far away.

She turned to see someone standing near her in the snow. He gazed into the distance, staring at something she couldn’t see. His long black hair stirred in the breeze and she held herself back from touching it; from running her fingers through the silky strands.

“Does it please you?”

She wasn’t sure what the question referred to: his hair, their location, the warm soothing tranquility that spread through her, so she chose the second and said, “I’m tired of the cold.”

“The world is cold. Cold faces, cold words, and cold hearts. All war, fight, betray, and steal to take everything that they can—gold, land, lives—with the hope that these will keep them warm. But one cannot steal warmth from another. One must make their own warmth.”

The words felt like wisdom, but in the dream she couldn’t grasp their full meaning. “I don’t understand.”

“Of course you do, you need only acknowledge it. But be not troubled. You will come to see the truth when you are ready.”

When Katelina woke the next evening she felt she’d dreamt something important. She blinked against the gloomy darkness, to find snatches, like wisps of cloud. There was a feeling of peace, a distant siren, a lake, but she couldn’t remember the rest. The cold of the floor seeped through her layers, and he Christmas lights flickered. Many of the bulbs were burnt out and left the strand looking like a gap toothed grimace. In the false twilight she could see the other vampires standing, stretching, and leaving. She rolled over to find that Jorick was still asleep. She brushed his hair back from his face, and gently traced his cool lips. The blisters were gone, and he was perfect again.

Though extra sleep probably wouldn’t hurt him, she didn’t like the idea of him being helpless while the Black Vigil was awake. “Jorick,” she whispered and shook him gently. “Jorick.”

He stirred, and came to with a deep, gasping breath, like someone who just remembered they needed air; not that he did. He sat up quickly, his head darting from side to side. “What is it?”

“It’s all right. I wanted to tell you the others are waking.”

He followed the Black Vigil with his eyes and yawned. “Yes. They would rise earlier than me since they’re sun walkers.”

Katelina nodded. “Ume said something like that last night.”

Jorick’s confusion melted away as he pulled the memories from her mind. “How disappointing. I’d hoped she’d make the red-headed clown squirm more than that. Never mind. Come, we’ll see if they have any facilities for humans.”

Fethillen was in the room at the bottom of the stairs. She sat in a folding chair, wearing a pair of headphones, and tapping a strange metal contraption that clicked rhythmically. She stopped and listened. Katelina eyed Jorick curiously and he murmured, “Morse code.”

He nodded and Fethillen removed the headphones. “I didn’t think you’d wake until later.” She turned and gave Jorick and Katelina a once over. “The sun is already gone.” She motioned to the stairs. “You’re welcome to find what you can. I’m afraid we have no food for humans. We don’t keep them.”

Katelina gave Jorick a horrified look. Did she mean they’d have to hunt something and cook it like barbarians? 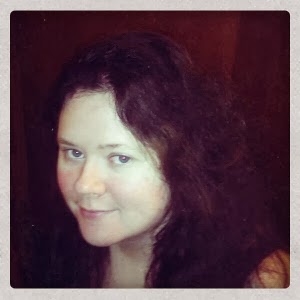 Joleene Naylor is the author of Amaranthine, a paranormal series where vampires live in the shadows and don’t sparkle. She grew up in southwest Iowa surrounded by soybeans, corn and very little entertainment – so she made her own. She has been writing and drawing since she was a small child, with a particular leaning towards fantasy, horror and paranormal. It is this love of all that goes bump in the night that led her to write the Amaranthine series.
In her spare time she is a freelance artist, book cover designer and photographer. Joleene maintains blogs full of odd ramblings and hopes to win the lottery. Until she does, she and her husband live near Bolivar Missouri with their miniature zoo. However, unless she starts buying tickets she won’t win anything.

The sixth installment of the Amaranthine series pulsates with the dark blood of vampire lore.
The Children of Shadows, a vampire cult not seen for hundreds of years, resurfaces to wage war on the vampire guilds. Led by a familiar face, the cult wreaks havoc while Katelina and Jorick are trapped in Munich. Ume, a mysterious vampiress, claims to know Verchiel and offers the help of her secret organization. But can they trust her?
As mysteries are solved, new ones appear. Why have the Children of Shadows returned, and is it really a former ally that leads them, or a look-alike?
Legends rise and secrets are revealed in a world where vampires walk, drenched in blood and shadows.