Today I'm hosting KT Byrski as part of a five-part interview. You can find the other parts of the interview at the links below: Tell us about your new book and when is it out? Where can people purchase it?

My book Hapax is out now! Hapax is an apocalyptic fantasy—with seven days before the world ends, a monk must ally with magicians (endangering his soul) to find the one word that will reset creation. Slight problem: no one remembers what this word is…

You can find Hapax on Amazon, the Amazon Kindle Store, Chapters (online), and Barnes and Noble (online). It is also available as a podcast on iTunes.

Is there anything new, unusual, or interesting about this book?

I like to call Hapax “science fiction in fantasy’s clothing.” While it is fantasy—gods playing a major role will do that—there’s definitely some science fiction vibes infused throughout. It’s like Blade Runner on magic, set in a monastery, with the apocalypse coming. As you can probably guess, religion also plays a large part, but I had a lot of fun tossing in everything from Roman Catholicism to Mayan mythology to string theory.

What was your favourite chapter (or part) to write and why?

I loved writing any and all scenes between Praeton (an eleven-year-old choirboy) and Serafine (an itinerant traveller who’s hiding a few secrets). Watching Praeton struggle to understand the unfolding events was great fun. So was watching Serafine’s protective side come out. I also loved the climax: that was one of the images I saw right from the start.

Tell us about your book’s cover—where did the image come from and what was the design process like?

When Dragon Moon Press acquired Hapax, I spent some time looking at their other titles. Scott Purdy’s artwork stood out to me: it was so wonderfully vivid and made something inside me say, “Yes. That.” So when DMP asked if I had any ideas, I said, “I like Scott.”

Luckily, he was free and willing, so he came up with four or five concept images. Together, he, DMP, and I settled on one image which he then executed and refined. I’ll never forget seeing the finished product for the first time—I had a grin ear-to-ear!

K.T. Bryski is a Candian author and podcaster. She made her podcasting and publishing debut with Hapax, an apocalyptic fantasy with Dragon Moon Press (2012). Select playwriting credits include scripts for Black Creek Pioneer Village (2011) and East o’ the Sun and West o’ the Moon: a Children’s Opera (Canadian Children’s Opera Company, 2014). She recently received her Hon. B.A. in History from the University of Toronto, and she is currently at work on her next novel. Visit her at www.ktbryski.com. 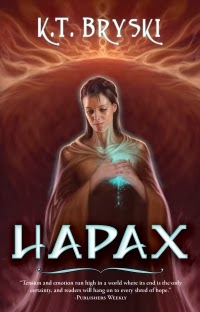 The Apocalypse has come, and in seven days the world will be no more.
Only the Hapax, the Word which began the universe, can recreate the world and avert the Apocalypse, but that Word has been lost. Brother Gaelin finds his faith crumbling as he is forced to shelter two fugitives from the Magistatiem, the college of magi which has been divorced from the Ecclesiat monks for centuries.
As time slips away, the monks and magi must do more than just heal the ancient rift that divides them—they must trust in the very Being who drove them apart.

Hapax is available in print, e-book, and podcast forms.