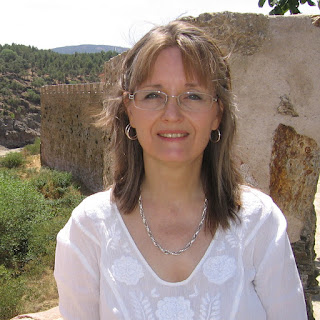 Happy Monday, everyone! (If there is such a thing.) Today as part of the Blog Ring of Power, I have part of a progressive interview with Sue Burke. She's a member of Broad Universe, and she recently translated a book called Amadis of Gaul Book 1. This book was originally published in 1508, about a century before Don Quixote. (Don Quixote was actually written to satirize the earlier book.)

You can find the other parts of the interview through these links: 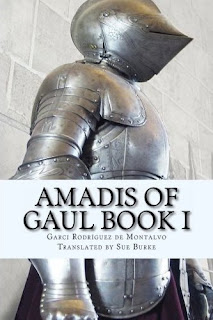 ow is this story different in English than the original language?

The original text makes good use of the ability in Spanish to create long, beautiful sentences. In fact, it was written to sound elegant and elevated when spoken -- this novel was made to be read out loud to an audience, which was how books were enjoyed in medieval times. English prose today has more strength than elevation, which makes it good for fight scenes, but a little weak for meditative passages.

Although it's easy to write a hundred-word sentence in Spanish even today, I generally have to use shorter sentences than the original. I always try to capture the word play, although again, English vocabulary has different strengths and weaknesses. But sometimes I succeed in capturing the charm of the original, as in this passage about Amadis's brother, Galaor, and a damsel he has just rescued:

"At this point the two damsels went to search through the castle with other women to find them something to eat, leaving Sir Galaor and the damsel, who was named Brandueta, alone, conversing as ye have heard, and as she was very beautiful and he was eager for such sustenance, before the meal was brought and the table set, together they unmade a bed that was in the hall where they were and made the damsel a woman, which she had not been before, satisfying their desires, which had grown great during the brief time they had spent gazing at one another in the flourishing beauty of youth."

2. What kind of research did you have to do?

One thing I had to learn was the names for the parts of a suit of armor: what does manopla mean, and what's the word for that in English? (Gauntlet.) I got some helpful reference materials from the Armory at the Royal Palace here in Madrid. I also had to master the names of the parts of a castle.

3. What tools are must-haves for writers and/or translators?

Good dictionaries. For Spanish, I recommend the Oxford English-Spanish Dictionary, the Diccionario de la Real Academia Española, and, if you can afford it, the Diccionario de María Moliner. These will run you about $550 altogether -- you're only as good as your tools, remember. (They're a little cheaper on this side of the Big Pond, thank heavens.)

You'll also need Internet access for the questions that all that money still hasn't answered. And English-language dictionaries and references. And of course a computer. You can also get specific translating software, which can be great time-savers, especially for non-literary translations -- technical manuals or legal contracts, for example.

4. Do you have any advice for other writers?

I think it's hard to appreciate how different people and cultures were in the past and the present. For example, in the Middle Ages in Spain, few people slept alone. Usually their servants were in the same room, sometimes in the same bed. Men who were friends held hands, and they wept freely when they were sad. Men also freely declared their love for each other -- non-sexual, of course.

Women rarely sat on chairs, but rather on pillows or low stools on a platform reserved for women in the best corner of the household. In households that could afford it, food was very spicy and meat was plentiful and fresh because knights and kings spent their free time hunting. Everyone at one point in their life, perhaps their whole life, had been a servant and considered it an honor. Everyone believed in what we would call magic today, although a different kind of magic than we're used to. And bawdy jokes were always appreciated.

I'll have an article in the February 2012 issue of Broadsheet, Broad Universe's magazine, about contemporary fantasy writers in Spain. The challenges they face might not be what you expect. http://www.broaduniverse.org/the-broadsheet-magazine/blog

I love learning about different cultures, so this was an interesting read - especially the part about how men were quite comfortable with holding hands and stating their love for each other. And the women's platform. Thanks for the read!