Today for the Blog Ring of Power, Mercedes Yeardley will tell us about her current work: Nameless, The Darkness Comes. You can find the rest of her interview at these links: 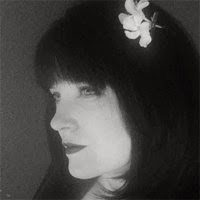 MMY: My debut novel titled Nameless: The Darkness Comes was just released in January. I’m so excited! It’s the first book in The Bone Angel trilogy, and the next two books come out in January of 2015 and 2016, respectively. It’s an urban fantasy book about a woman named Luna who can see demons. It touches on quite a few realistic subjects including depression, insanity, drug use, etc, but still manages to be funny.

Is there anything new, unusual, or interesting about your book? How is it different from other
books on the same subject?

MMY: It differs in a couple of ways. Luna deals with the demonic, certainly, but she isn’t a demon slayer. She doesn’t always keep her cool and go after things with a katana. She just wants to be left alone. She bites her fingernails. She wears old rock band tees. She isn’t attached to anyone or anything…except her motorcycle, brother, and niece. Everyone else can go hang.
The other difference is that there’s a very heavy dose of humor. Luna uses her sense of humor to keep the horrors at bay. I find that the people who deal with the darkest things have the wickedest sense of humor. It keeps the book light enough that readers are able to finish it. It’s quite dark, otherwise.

MMY: I was pregnant with triplets and lost two of them. The third was in NICU for several months. I had to stop writing the book to focus on life for a while. That was difficult, but the book was such a joy to return to. It also helped me cope with the loss. In the book, a little girl goes missing. I found that I was able to work through some of my own pain while Luna explored hers. So it was very therapeutic, in a way. I feel like Luna and her gang have become my friends.

MMY: I loved writing the House of Horrors. It’s a nexus of evil. There are some particularly disturbing scenes in that section (so I am told) and I’m quite proud of them. They were all based on dreams that I’ve had. I write them down in a notebook and keep them for future use. The starfish, the thing swimming under the stone, the girl with her pendant? All of those came from Mercedes nightmares. I feel like I’m taking something negative and forcing it to work for me. 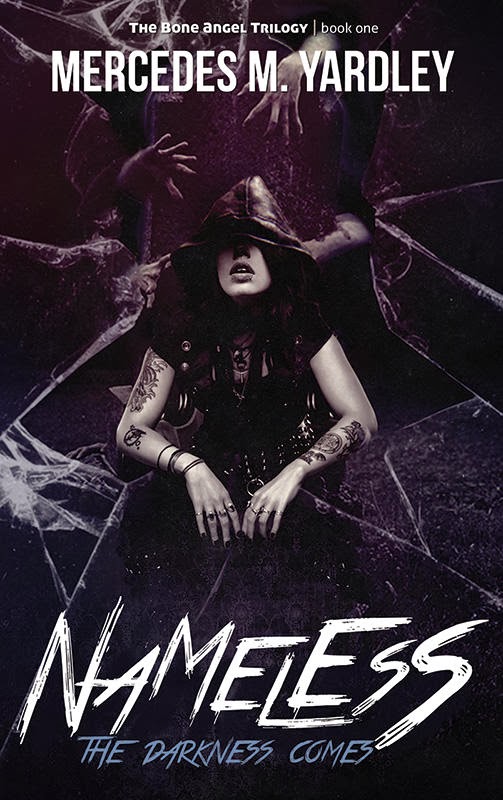 MMY: George Cotronis did the design. He’s so fabulous! He also did the cover for my novella titled Apocalyptic Montessa and Nuclear Lulu: A Tale of Atomic Love. He has this style that’s really surreal and gritty while being clean and messy at the same time. I can’t explain it. But I wrote up a few things about the story, described Luna to him, and left him alone to create. He came up with this gorgeous, dark cover that nails the feeling of the story perfectly. George captures essence rather than actual scenes. It’s one of the things that makes his covers sparkle so well. Then JM Martin does the font and pulls everything together. People have had wonderful things to say about the Nameless cover, and I couldn’t be more pleased with it.

Mercedes M. Yardley wears stilettos, red lipstick, and poisonous flowers in her hair. She likes to do a little bit of everything, and writes dark fantasy, horror, nonfiction, and poetry. Mercedes minored in Creative Writing and worked as a contributing editor for Shock Totem Magazine.  She is the author of the short story collection Beautiful Sorrows, the novella Apocalyptic Montessa and Nuclear Lulu: A Tale of Atomic Love and her debut novel Nameless: The Darkness Comes, which is the first book in THE BONE ANGEL TRILOGY.  She often speaks at conferences and teaches workshops on several subjects, including personal branding and how to write a novel in stolen moments. Mercedes lives and works in Sin City, and you can reach her at www.mercedesyardley.com.

Luna Masterson sees demons. She has been dealing with the demonic all her life, so when her brother gets tangled up with a demon named Sparkles, ‘Luna the Lunatic’ rolls in on her motorcycle to save the day.
Armed with the ability to harm demons, her scathing sarcasm, and a hefty chip on her shoulder, Luna gathers the most unusual of allies, teaming up with a green-eyed heroin addict and a snarky demon ‘of some import.’
After all, outcasts of a feather should stick together...even until the end.