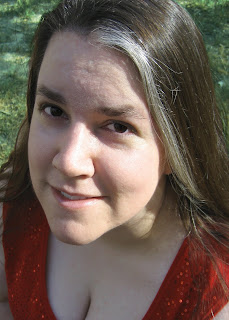 Today I'm interviewing Barbara Ann Wright as part of the Blog Ring of Power. This is Part Four (About Your Current Work.) You can find the previous interviews on Terri's, Theresa's, and Emily's blog; Dean will host the final part tomorrow.

My new book is a lesbian fantasy romance called The Pyramid Waltz, and it is available for preorder now from boldstrokesbooks.com or amazon. On September 18, it will be at a bookstore near you. If it isn't, you can definitely request it, and they will order it for you. You'll probably have better luck at independent bookstores and most especially, LGBT bookstores. Support local bookstores!

It's new for me in that it's a lesbian romance, the first I've ever written, but a story I've always wanted to write. There's a lot of great lesbian romance out there already, but I think mine is a little different in that it's more traditional fantasy as opposed to urban fantasy. I love urban fantasy, but traditional swords and sorcery will always have a special place in my heart. I'm just an old-fashioned, stabbing kind of gal.

I was afraid of the reactions I would get, that if people knew I was writing a lesbian romance, they would assume I was a lesbian, even though I'm married to a man. When I looked deeper, I saw that I was afraid because they'd be half right. Writing the book has helped me come to terms with my bisexuality and has let me be open about that part of my life, both with myself and others. Instead of being judged, though, I've been overwhelmed by the support I've found. If anyone's had a negative reaction to what I've written, they've kept it to themselves.

I would say the love scenes, but fight scenes have always been my babies. I love writing action, the short, choppy sentences. The flow.The drama of having a character on the cusp of losing rise to fight again. And since my fights are usually good vs. evil, I have the added pleasure of beating down the bad guys with my words.

Is there a message in your novel that you want readers to grasp?

Even though The Pyramid Waltz is billed as a lesbian fantasy romance, the word lesbian is never used in the book. In my made-up universe, no one cares about sexuality. When consenting adults have sex, no one is keeping track of which genitals touch. I wanted to show that this is completely possible, that everyone can be "normal" when it comes to sexuality, and that lesbian love can be just as complete and beautiful as any other kind of love.

Barbara Ann Wright writes fantasy and science fiction novels and short stories when not adding to her enormous book collection or ranting on her blog. Her short fiction has appeared twice in Crossed Genres Magazine and once made Tangent Online's recommended reading list. She is a member of Broad Universe and the Outer Alliance and helped create Writer's Ink in Houston.The Pyramid Waltz is her first novel. She is married, has an army of pets, and lives in Texas. Her writing career can be boiled down to two points: when her mother bought her a 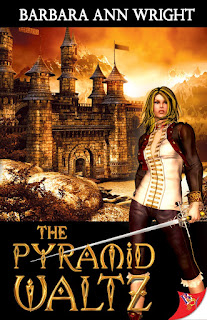 typewriter in the sixth grade and when she took second place in the Isaac Asimov Award for Undergraduate Excellence in Science Fiction and Fantasy Writing in 2004. One gave her the means to write and the other gave her the confidence to keep going. Believing in oneself, in her opinion, is the most important thing a person can do.

Book blurb for The Pyramid Waltz: To most, Princess Katya Nar Umbriel is a rogue and a layabout; she parties, she hunts and she breaks women's hearts. But when the festival lights go down and the palace slumbers, Katya chases traitors to the crown and protects the kingdom's greatest secret: the royal Umbriels are part Fiend. When Katya thwarts an attempt to expose the king's monstrous side, she uncovers a plot to let the Fiends out to play. Starbride has no interest in being a courtier. Ignoring her mother's order to snare an influential spouse, she comes to court only to study law. But a flirtatious rake of a princess proves hard to resist, and Starbride is pulled into a world of secrets that leaves little room for honesty or love, a world neither woman may survive.

Barbara, I'm intrigued by the premise. If you don't mind me asking, did the change in attitude toward sexuality affect the rest of the world-building? (i.e., how do marriage and inheritance work in your world?)

I think my attitudes about sexuality and women influenced my world-building. There are no gender restrictions to marriage, and anyone can inherit. In the book, the current king's heir is a girl, and I have many women who have noble titles of their own that they didn't get from their husbands or fathers. Titles and fortunes get passed to the eldest child, regardless of gender.

Thanks again for having me.

Thanks again for the interview, Barbara! I think this book has to jump to the top of my ever-growing To Read queue. ;)