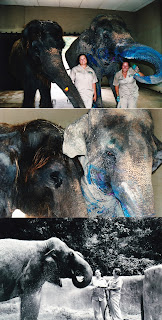 Welcome to April, and good luck to everyone participating in the Blog A-Z Challenge! I already have several other blogging activities going on, so I won't be joining the fun.

This round of the Blog Ring of Power we're interviewing Sarah Jane Drum, paranormal romance and fantasy author. Please see the links below for the other parts of the interview:

We'll be learning about her current work today.


Tell us about your new book—what is it about—and when it is out? Where can people purchase it?

My newest release is Caged in Myth, written under the name J.T. Fairfield.

Blurb: The Bayou Zoo, where magic is real, the beasts are deadly, and a bad day at work can literally mean the end of the world.

Octavian Julius McKellter— “Jay” to everyone who doesn’t want a punch in the face— struggles with keeping the secrets of his supernatural community and his own secret...he's gay. Throw in a dose of danger, deceit, and Louisiana heat, and you'll find yourself CAGED IN MYTH.

Caged in Myth is told from a first-person POV by a male main character. The Urban Fantasy genre is dominated by female leads and, if the lead is male, it’s rarely told in first-person. Also, there’s the tiny fact that my main character is gay.

The hardest part is keeping all of the creatures, species, and supernatural beings straight in my mind. There are so many different myths in play from various cultures, I keep a ton of notes so I can remember what characteristics and abilities I’ve assigned each animal and person. Keeping the count and placement of the magical creatures inside area five is also tricky. I had to draw a map for myself and post it up on the wall behind my computer. I wouldn’t want Jay to be eaten because I can’t remember where the Gryphon enclosure is located!

Any section involving the ambience of southern Louisiana. When I lived there, I loved the sweet scent which always lingered in the wet, heavy air and the sounds of the critters and creatures in the dark. 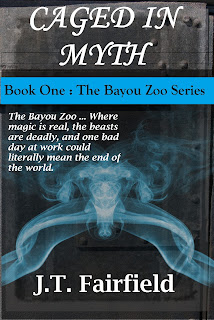 S.J. Drum also writes LGBT Upper YA Dark Urban Fantasy under the pen name J.T. Fairfield. The first book in the Bayou Zoo series was released on 10/22/12, CAGED IN MYTH.

When she's not changing diapers or writing, she enjoys scuba diving and has been known to make an elephant do a headstand.

A zoo full of mythical creatures - you could add to that series for years. Congratulations, JT.