At least there's one good thing to look forward to on Mondays: the Blog Ring of Power! Today, I'm interviewing Kristi Petersen Schoonover about her current book. This is Part Four of her interview; you can find the About You section on Terri's blog, The Writing Life on TW's blog, and The Creative Process on Emily's blog. The interview concludes tomorrow with Dean and Words of Wisdom. In the meantime, let's learn more about Kristi and her book, Bad Apple:

My book is a dark psychological thriller called Bad Apple—it was, in fact, just nominated for a Pushcart Prize, about which I’m totally over the moon. After an unfortunate incident on a Maine apple orchard, precocious teen Scree is left with a father she’s not sure is hers, a never-ending list of chores and her flaky brother’s baby. In a noble move to save the child from an existence like her own, Scree flees to a glitzy resort teeming with young men just ripe for the picking. But even as life with baby becomes all she’d dreamed, Dali-esque visions begin to leach through the gold paint.
Bad Apple deals with many themes—loss, injustice, beauty among them—but it’s really the story of a young woman who is forced to take on a caregiving role when she’s still a child herself, and the kind of damage which results. Since that happened to me, I’m very passionate about this piece. The American Association of Caregiving Youth --http://www.aacy.org --  is an organization that provides support for those 18 and under who put their lives on hold to care for an ill or disabled family member, and so I’m donating half my royalties and $3 from every copy I hand-sell to the organization (you can learn more about this on my website here: http://kristipetersenschoonover.com/buy-bad-apple-take-a-bite-out-of-youth-caregiving/
It’s been published by Vagabondage Press Books and is available everywhere and in all formats.

There are many nonfiction books about the effects of youth caregiving on an individual, and there are many fiction books in which the main character, or some character, is a caregiver. This explores the impact through the lens of psychological horror in a Shirley Jackson-influenced way. In addition, one of the things I’ve always loved about the Bad Apple story is its structure: although it has a novel’s word count, it’s structured like a long short story. That allowed me to build and build to a surprise at the end. It’s really hard to hoodwink your audience for an entire book if you’re using one of the traditional novel structures.

That came during the editing process—my editor at Vagabondage Press and I spent hours and hours working on the main characters’ ages to ensure it all made sense; in the end, we eliminated exact ages and went with something more vague: Scree’s grade level.

What was your favorite chapter (or part) to write and why?
The opening, because some of the subject matter is not only dark, it walks a fine line, and when I wrote the first draft I wasn’t concerned about that—I just wrote whatever was coming out. I had a ball just being reckless.


No. I’m completely happy with this book and I wouldn’t change a thing (although sometime before June there will be a reissue with quotes from reviews on the back cover and new font lettering on the front).


Kristi Petersen Schoonover's Pushcart-nominated psychological horror novel Bad Apple has been called “deeply disturbing in the best way possible,” by SciFi Saturday Night. Her short fiction has appeared in Carpe Articulum, The Adirondack Review, Barbaric Yawp, The Illuminata, Morpheus Tales, New Witch Magazine, Toasted Cheese, The Smoking Poet, The Battered Suitcase, and a host of others, including several anthologies. She is the recipient of three Norman Mailer Writers Colony Winter Residencies and is an editor for Read Short Fiction (www.readshortfiction.com). She lives in the Connecticut woods with her housemate, Charles, three cats--Poe, Mikey, and Kali--and her husband, paranormal investigator and occult specialist Nathan Schoonover of The Ghostman & Demon Hunter Show (www.ghostanddemon.com). She has a passion for ghost stories, marine life, and Tarot cards and still sleeps with the lights on. 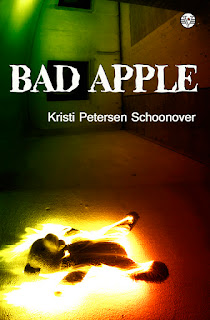 After an unfortunate incident on a Maine apple orchard, precocious teen Scree is left with a father she’s not sure is hers, a never-ending list of chores and her flaky brother’s baby. In a noble move to save the child from an existence like her own, Scree flees to a glitzy resort teeming with young men just ripe for the picking. But even as life with baby becomes all she’d dreamed, Dali-esque visions begin to leach through the gold paint…

Fans of The Haunting of Hill House, The Lovely Bones, and Carrie shouldn't miss Bad Apple--a dark, surreal ride that proves not all things in an orchard are safe to pick.

Bad Apple is available in all formats, both print and e-book, and is available wherever you purchase your books.

Good luck with the Pushcart Award! A Maine apple orchard gets The Cider House Rules music in my head...