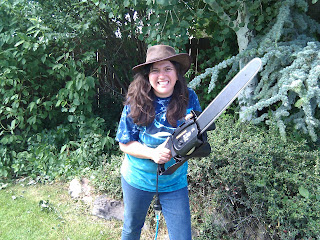 Today the Blog Ring of Power is interviewing Karina Fabian. I first heard of her when we both had stories published in the anthology Firestorm of Dragons. Since then, she's published other works, including Live and Let Fly and her latest, I Left My Brains in San Francisco, the second in the Neeta Lyffe, Zombie Exterminator series. Let's learn more about Karina's creative process:

Where do you get your story ideas?

I once watched my grandmother make chocolate frosting for a cake by going through her shelves, pulling out a little of this, some of that, seemingly at random, and making them into something amazing.  I tend to write the same way—little bits here and there.  For example, *I Left My Brains in San Francisco* came as a result of a needing a second book for my character Neeta Lyffe, Zombie Exterminator, a trip to San Francisco, my brother-in-law’s suggestion that a refinery would be a good place for a zombie attack, and a prompt chat in which we were to sell a vehicle that ran on manure.

Do you have a specific writing style?

Like so many things, this can vary by story, but my writing is usually more action and dialogue-oriented.  I don’t go in for long, literary descriptions illustrating the pathetic fallacy of the cornfield in the rain.

How do you deal with writer’s block?

I don’t believe in writer’s block.  I have been lazy or intimidated by a story, but not really blocked.  The only way to deal with either of those is to work through them.  Give yourself permission to write junk—you can always clean it up later—and go for it.

How do you develop your plots and characters? Do you use any set formula?
For the most part, I start with the character or a situation, and it grows.  I don’t follow a formula, fill out character worksheets, or do any kind of trick.  I just imagine and let it flow.

Are you a “plotter” or a “pantser” (do you plan/outline the story ahead of time or write “by the seat of your pants”)?

I’m a little of both, in varying degrees, depending on the book.  For I Left My Brains in San Francisco, I pantsed, and had to go back and reorganize a few scenes in order to fix the flow.  (There are a lot of independent scenes of zombie sightings and attacks.)  Other times, I’ve written extensive outlines, and sometimes, I plot out a basic progression and let my characters take over.

Do you use critique partners or beta readers? Why or why not?
I love critiquers.  They help me find my errors, whether typos or problems in the content or characterization.  I have a few friends who are writers and who know not to hold back when it comes to critiquing.  They’re invaluable!

How much time do you spend on research? What type of research do you do?
I spend as much as I need to answer the questions I have, then I move on.  So I do a lot of looking things up on the internet—yes, I sometimes even use Wikipedia—or I call a source.  It’s lots of fun calling people cold and asking them to help out in my bizarre plots.  For I Left My Brains in San Francisco, I talked to Greg Hardy, Manager of State Government Affairs, Rocky Mountain Division, at Chevron about planning a zombie attack.  It was fun.

Is there anything you find particularly challenging to write?

Literary descriptions illustrating the pathetic fallacy of a cornfield in the rain? 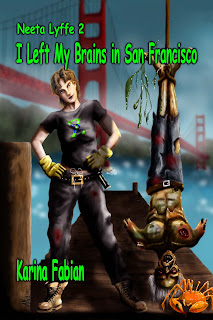 On vacation at an exterminator’s convention, she's looking to relax, have fun, and enjoy a little romance. Too bad the zombies have a different idea. When they rise from their watery graves to take over the City by the Bay, it looks like it'll be a working vacation after all.

Enjoy the thrill of re-kill with Neeta Lyffe, Zombie Exterminator.


Find I Left My Brains in San Francisco at:
Damnation Books: http://www.damnationbooks.com/book.php?isbn=9781615727643
Amazon: http://amzn.to/Nzm01L (paper) http://amzn.to/OBBmkL (Kindle)
More about it at http://zombiedeathextreme.com

For the rest of Karina's interview with the Blog Ring of Power, please follow these links: