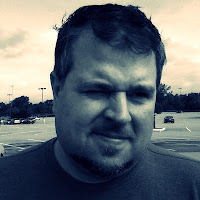 This is the last Blog Ring of Power interview scheduled for the year. We are planning some year-end special events, including some giveaways, so please check back here for further details. In the meantime, we're in the middle of an interview with Jackson Jack Miller. Today he's going to tell us about his writing process:

Do you have a specific writing style?

Over the past ten years my writing evolved from a narrative-intensive, almost travel narrative-style to one that relies on dialog as a way to drive the plot. Nancy Kress sparked this change in my style when she visited Seton Hill University back in 2006.

Thus, my style focuses on dialog and (hopefully) memorable language.

How do you develop your plots and characters? Do you use any set formula?

I just finished a draft of The Revelations of Preston Black, a novel that I built around a single scene. When visions of snake handlers and bottle trees and swamps danced through my head I knew they were too awesome not to use. But I'd originally thought the segment would go in a different novel. After a sequel for The Devil and Preston Black started to fall into place, I decided to use the snake handlers as a centerpiece. All I had to do was get Preston into the South and put an antagonist (or three) on his tail. After that, the outline materialized organically.

And it was no different for the other things that I'd written. A mentor, Timons Esaias, had once told me that "every concrete noun paints a picture." So I tend to favor extremely visual scenes that tie to major plot points, almost taking liberties with the realism of the story by contrasting it with hyper-real settings or visual details.

Characters come about in a similar fashion. I suppose I tie a key characteristic or flaw to each of them, and let that flaw express itself through dialog and motivations. Hellbender's Henry Collins, for example, is motivated by a stubbornness that drives an unwillingness to accept some of the bad things that have happened to him in a way that eventually forces him to act. But the stubbornness lies at the root of his intense loyalty. Preston Black, on the other hand, is filled with a blinding passion that leaves him unable to see the walls crumbling around him. Yet in the end it's his drive to fulfill a dream or die trying that saves him.

Pantsers are like sasquatch—I'm not sure they really exist. I know a lot of writers who SAY they are pantsers. They're the ones who seem to spend a lot of time rewriting and deleting long passages of prose.


Do you use critique partners or beta readers? Why or why not?

My wife, Heidi Ruby Miller, is my critique partner. She excels at picking up plot holes and inconsistencies, but is better at looking for shoddy character motivations and things less likely to be picked up by a beta reader. I know that she won't let me write anything that I'd later find embarrassing or silly, even if it hurts me to hear it. I'm not sure how many writers have that layer of honesty with critique partners.

I take it as a personal challenge to make the book as close to 'finished' as possible before my editor—Raw Dog Screaming Press's Jennifer Barnes—sees it. I don't want her to think I'm some kind of slacker, or worse yet, illiterate, even though she does have a hard time deciphering my Yinzer speak sometimes.

How much time do you spend on research? What type of research do you do?

Everything is research. Years of playing guitar. Ten summers as a whitewater raft guide. Trips to Mexico, Nashville, Czech Republic.

Good research is essential to good writing—that's not negotiable. Details make settings and characters real to readers. Travel is probably my favorite way to research. Every new word, taste, and scent is fodder for upcoming characters and plots. More than these are the feelings you experience as a traveler—the sense of awe when confronted with nature, the sense of fear in a place where English is a second--or even a third language--mental fatigue from long days on the road.

Speculative genres can't function without a level of realistic detail to convince readers that what they're reading isn't silly. That's why the research—even academic research, like spending time in a library—is critical. My rule is to get hundreds of ideas for details and dialog, and to use about 25% of what I've found. The rest materializes below the surface in setting, plot, characters, etc..

To read the rest of Jason's interview, please check out the following links:

Jason Jack Miller hails from Fayette County, Pennsylvania, as in, "Circus freaks, temptation and the Fayette County Fair," made famous by The Clarks in the song, "Cigarette." He is a writer, photographer and musician. An outdoor travel guide he co-authored with his wife in 2006 jumpstarted his freelancing career; his work has since appeared in newspapers, magazines, literary journals, online, as part of a travel guide app for mobile phones, and in a regular column for Inveterate Media Junkies. He wrote the novels Hellbender and All Saints during his graduate studies at Seton Hill University, where he is now adjunct creative writing faculty. In 2011, he signed a multi-book deal with Raw Dog Screaming Press. When he isn't writing he's on his mountain bike or looking for his next favorite guitar. He is currently writing and recording the soundtracks to his novel, The Devil and Preston Black, and writing his next novel, The Revelations of Preston Black.

About Hellbender:
Although the Collins clan is steeped in Appalachian magic, Henry has never paid it much attention. But when his younger sister dies mysteriously Henry can’t shake the feeling that the decades-old feud between his family and another is to blame.

Strange things are happening at the edge of reality, deep in the forests and mountains of West Virginia. Let Jason Jack Miller take you to a place where love is forever even when death isn’t, where magic doesn’t have to be seen to be believed, where a song might be the only thing that saves your soul.

What format is your book(s) available in (print, e-book, audio book, etc.)?
Paperback and eBook

Thanks for the opportunity! Had a lot of fun with the interview.

Sounds like you have a pretty good beta reader there, Jason Jack Miller!

Thanks for bringing this interview to us, Sandra!

You're welcome, Jason and Heidi!