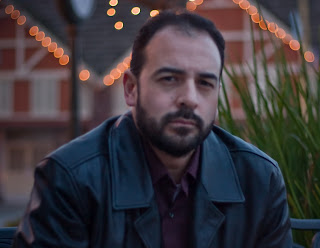 Welcome back to the workweek. Today I have Part Two of the Blog Ring of Power's progressive interview with James Garcia. You can find the first part here on Emily's blog. To follow the rest of the interview, please visit Dean on Tuesday, Terri on Wednesday, and Theresa on Thursday.


What is your writing process? Do you follow a regular routine? Do you use pen and paper or computer? Work at home or at the library/Starbucks, etc.?

My writing process is constantly in flux. I have an 11 hour day job. I work for Sun Maid Raisin Growers of California (the lady on the red box, that’s me). I get up at 3 am in order to be at work very early. With this kind of schedule I do not have time to do it all, as you can well imagine. I have to constantly juggle networking, promotion, blogging/social networks with reading and writing. Basically I read a little every day and network. Writing is usually left to weekends. I started writing my first novel, Dance on Fire, over twenty years ago and then moved it to the back-burner due to family, career and my lack of maturity. It was nearly two decades later that I realized the regret I would have if I didn’t give writing one last shot. I finished the novel, found a publisher 18 months later and started this crazy ride. While awaiting publication it occurred to me that I hadn’t written anything new. I jumped into the sequel to that novel and had the first two drafts done in 8 months. Not knowing what might come of those books, and also to do with the demands of my schedule, I waited a while before beginning any new projects. This spring I began a third novel. It is a stand-alone ghost story and I wrote that first draft in 4 months or so. I work at home on my trusty laptop.

How do you balance writing with other aspects of your life?

We might actually find proof of Bigfoot or the Loch Ness Monster before any of us actually achieve that elusive “balance”. *laughs* I gave up playing golf, watch television only during meals and force myself to climb onto my treadmill 4-5 days a week. Other than that, I have two teenaged boys and an understanding wife. I check in with them, have meals with them and we spend some time on weekends. When the boys have concerts or plays, I’m there. That’s my balance. *frowns*

When do you write?

I write or edit only on weekends at this point.

How much time per day do you spend on your writing?

When I write, I get up early Saturday morning and write for about four hours and have been known to knock out between 2-4 thousand words in a session.

What has been the strongest criticism you’ve ever received as an author? The best compliment?

The strongest criticism I have received so far has been that there is too much Christianity in the story. The thing is that I never intended to write a vampire story. When I first starting writing down the images in my head, it was only a crime story. As a Christian, what I love about horror is the sitting on the edge of your seat. I can do without the torture-porn, you know? So, when the story revealed itself to be vampire, I decided to make it a Christian cross-over, because we needed another vampire story like a hole in the head, or so I thought. I hope readers will not feel as if I have hit them over the head with Christian themes. In terms of compliments, I just love it when someone comes up to me without my having asked them about it and they start raving about my work. It doesn’t get much better than that.

Other than your family, what has been your greatest source of support?

My family has been great to support me, to ask how things are going, and promo for me and things like that; however, my greatest source of support has come from like-minded writers along the internet. They know what it’s like and how playing this game feels. Many may never read my novels, but because they understand this life, they have been quick to offer encouragement and support.


James Garcia Jr. was born in the Central California town of Hanford. He moved up the road to Kingsburg with his family as a child. After graduating KHS, he attended Reedley College where he met his wife. They, along with their teenage sons, still make their home in Kingsburg which is also the setting of James’ debut vampire novel. “Dance on Fire”, was published in 2010 and its sequel is scheduled for an early 2012 release. James is an Administrative Supervisor for Sun-Maid Growers of California.

Each May, the Central California town of Kingsburg celebrates its Swedish heritage with the annual Swedish Festival: a weekend event where the town puts on its traditional dress, culminating with a dance around a Maypole on Friday, and a Swedish pancake breakfast and parade on Saturday. The town with a population of over 11,000 residents draws thousands more to the event. This year, two uninvited guests also converged upon the unsuspecting town.

Nathaniel is a vampire. He wandered into town, bothering no one; feeding upon stray cats and other vermin, wanting nothing more than to have a place to rest his head. Vincent is a second vampire, and the one responsible for making Nathaniel. He has been searching for his long lost “son” for well over two centuries. Vincent’s goal is to take Nathaniel home or kill him. Nathaniel has often wished for death, wondering why God ever allowed this punishment: to walk the earth undead and unable to be redeemed. Does God remember the little boy from Romania who watched his parents die, was raised by the murdering vampire, only to become one himself? What does God think of Nathaniel and could there yet be redemption for one outside of heaven?

Ten days before the start of the Swedish Festival the most tumultuous week in the history of Kingsburg has begun with two vampires leaving death and destruction in their wake. Kingsburg Police Detectives Mark Jackson and Michael Lopez, Barbara and the entire Lopez family find themselves drawn into something that threatens to destroy them all or leave them scarred forever.


In a marriage of the classic horror story and the Christian themes of good conquering evil and redemption, Dance on Fire is the account of characters being drawn into the fire and the supernatural forces around them watching as they burn.

Too much Christianity? Interesting complaint. (Wouldn't bother me though.)
Balancing it all is a challenge. Most of what I've given up I don't even recall now though.
Good interview!

Thanks, Alex. It was very good of you to stop by. A thank-you as well to you, Sandra, and all the rest of the Ring of Power. I appreciate the opportunity to share with you and your readers.

Jimmy, your dedication puts me to shame.

Have you ever considered investing in a Notebook and writing during your lunch hour at work?

I wish you continued success!

Hello there, Maria. Thanks for stopping by. I have thought of taking a step like that one, but am holding off until I start making some money. What I currently do - whether it be a blog post or piece of fiction that I'm writing - is I write on a word doc at work and then e-mail it to myself at home. During coffee breaks, of course. ;)