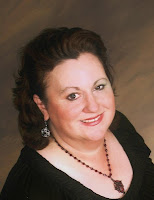 I hope everyone had a good weekend. Today I have Denise Verrico here to discuss her current work. This is Part Four of the Blog Ring of Power interview; click the links for Parts One, Two, and Three. The interview will conclude tomorrow at Dean's blog.

Denise has a special treat for us today: Comment and leave your email address to receive a free copy of Denise Verrico’s ANNALS OF THE IMMORTYLS, a trio of dark urban fantasy tales featuring characters from her Immortyl Revolution series.

Servant of the Goddess joins the heroine of my first two Immortyl Revolution books with the hero of my third.  Mia and Cedric are both strong and passionate personalities.  Cedric has escaped slavery and just suffered a horrible loss in India.  He arrives in New York with little but the clothes on his lovely body and his considerable wits and talent.  Mia has stood by her lover, Kurt, as he led his rebellion against the Immortyl establishment, but she’s restless in her role as consort.  Here comes this irreverent, hell-bent on revenge vampire kid, Cedric, with intimate knowledge of internal strife within the chief elder’s court.  Cedric is an adept of the ancient arts, the closest thing the Immortyl culture has to a rock star, and even Mia is smitten by his mystique.  The kid is a fire that brings Mia’s discontent to boil.  Needless to say, mayhem ensues.  Politics, both mortal and Immortyl come into play, and Mia and Kurt discover a disturbing turn of events in the race for immortality.

DV:  Well, the book is set in NYC in 2001.  I couldn’t ignore 9-11.  At first, I shied away from dealing with it, but then, I made the decision to make it integral to the plot.  The stakes of harnessing immortality become much higher in the post 9-11 world.


What was the hardest part of writing this book?

DV: Writing about 9-11 was tough.  I’d jotted down some thoughts and feelings I had when it happened, never intending them to come into play in a fantasy novel.  We lived in Northern NJ, less than ten miles from Manhattan.  I saw the smoke plume from my house and workplace.  My husband worked in Times Square for Reuters.  Everything about that day came back to me when I was writing the chapters about 9-11.  I didn’t lose anyone that day.  Everyone I knew who worked there either didn’t make it to work or got out safely.  But like most people I know, I felt a mixture of sadness, fear and anger.  In the book, I wanted to deal with the event itself with taste and sensitivity.  I focused on the effect it has on my main characters and the difficulty it poses for a group that lives off the grid.

I like the exchanges between Mia and Cedric.  They are so different, yet so fundamentally alike.  She’s in her seventies, even if she looks twenty.   Cedric is twenty, and even though he’s worldly wise, he’s a reckless young man.  He loves rock music.  She hates it.  He’s wild and promiscuous.  She’s cautious and forced to be discreet in her sex life.  He’s spoiling for revenge, and she understands this is politically unwise.  Cedric sees Mia as the earthly manifestation of Durga, and she exploits his religious zeal to her ends.  I won’t give it all away, but this relationship raises sparks.  Red hot sparks.


Did you learn anything from writing this book and what was it?

I can write a HEAFN ending.  Yes, it was difficult, but I did it.  Whew, I might have to turn in my Melancholic’s Anonymous card now and wear pastels.  No, not pastels--that would be too painful.

For excerpts of the Immortyl Revolution Series, character profiles and the Immortyl Lexicon visit www.deniseverricowriter.webs.com

For insider information on the series visit www.ImmortylRevolution.blogspot.com

Barnes and Noble:
Servant of the Goddess Trade PB and Nook

Sandra, thanks for having me here today!

Interesting mashup of hindu deities, vampires and 9/11! I wrote about 9/11 in my YA, Refugees, and it was rough. But readers appreciated it. Not many wanted to tackle it at all!
Kudos.
my email: kitsy84557 AT gmail DOT com

Thanks, Catherine! I became intrigued by Indian mythology when researching vampires. It's interesting to find out the orgins of the more familiar Eastern Euorpean folklore. I'm sending you an email with the coupon code and link!