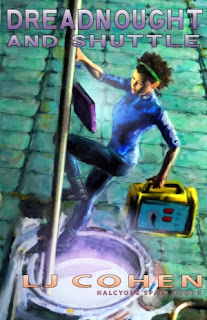 Today I get to welcome Broad Universe member LJ Cohen to my blog. LJ Cohen is a novelist, poet, blogger, ceramics artist, and relentless optimist. After almost twenty-five years as a physical therapist, LJ now uses her anatomical knowledge and myriad clinical skills to injure characters in her science fiction and fantasy novels. She lives in the Boston area with her family, two dogs, and the occasional international student. DREADNOUGHT AND SHUTTLE (book 3 of the SF/Space Opera series Halcyone Space), is her sixth novel. LJ is a member of SFWA, Broad Universe, and the Independent Publishers of New England.

LJ will give one of her eBooks (winner's choice) to a commenter on this post. Winner will be chosen at random. Please comment by Wednesday, June 22nd, by midnight. I'll announce the winner on Friday, June 24th.


Please see below for LJ's thoughts on why speculative fiction is so important:


When I was young and just starting to choose what I wanted to read, I gravitated to science fiction and fantasy. My mother – a voracious reader – always wanted to know why I didn’t read more “normal” books. By normal, she meant set in the real world. She read a lot of what we now term women’s fiction and the occasional historical novel. Speculative fiction (I use the term as a larger umbrella for science fiction, fantasy, horror, and slipstream work) was something she didn’t have interest in.

But I grew up in an era where technology made marvels every day. When I was a child, we sent astronauts to the moon! We built supersonic airplanes! We transplanted hearts! Is it any wonder I discovered the library shelves devoted to stories about such wonders and read everything there? It wasn’t that I never read outside of genre, but even the books in the literary world I loved had a touch of other-worldliness in them.

To answer that, I need to go back to my childhood.

I was a toddler when Star Trek first aired and didn’t catch the show until it hit syndication several years after its original run, but I was hooked from the start. Here were men, women, and aliens all working together in a future I was desperate to be a part of.

Women whose roles were not limited to love interests or victims. Maybe I wasn’t able to articulate it in that way when I was young, but I certainly remember it was a powerful antidote to being told that girls couldn’t grow up to be astronauts.

I was told that. I was told that by my school guidance counselor. By a school that automatically scheduled all girls for home economics and all boys for shop. By a society that erased the contributions women and minorities made to history, science, and technology.

Star Trek told a different story. So did the seminal book of my childhood: A Wrinkle in Time. Not only was the hero of the story a young woman – Meg Murry – but her mother was a scientist. That story, along with the implicit message of Star Trek, was also a powerful negation of all the messages the rest of society was sending.

So why do I write science fiction and fantasy? Why do I include a diverse cast of capable characters? Because society is still broadcasting messages of inherent inequality. There is still a hierarchy of worth where whiteness and maleness are depicted at the top.

There is ample evidence that readers live in silos: both overtly and covertly and from an early age, most boys are steered away from fiction that depicts women as lead characters. But speculative fiction seems to be a way to offer a world of greater inclusiveness that doesn’t turn away potential readers quite so readily. I’ve always seen the literature of speculative fiction as beautifully subversive: it talks about broad societal issues without it being directly about society. It gets in around the cracks of entrenched beliefs in a way more realistic fiction does not.

So in the world of Halcyone Space, the crew of the old, broken freighter is diverse. There are women and people of color in roles of authority. There are friendships, both with and without romance, within genders and between them. All of this is presented as a given, with no specific fanfare. It just offers up a future world where the old hierarchies no longer limit us.

And that is the power of speculative fiction.

Dreadnought And Shuttle
When a materials science student gets kidnapped, she's drawn into a conflict between the young crew of a sentient spaceship, a weapons smuggling ring, and a Commonwealth-wide conspiracy and must escape before her usefulness as a hostage expires.

Sounds like we are about the same age, LJ - I share those memories.
Star Trek was groundbreaking on so many levels that people couldn't appreciate at the time. Glad it nudged us both in the direction of science fiction.