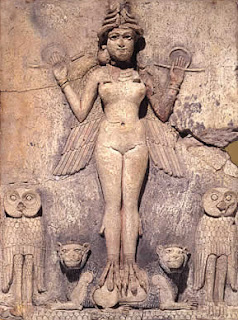 This is the last new Blog Ring of Power interview for 2013; we'll be starting our Year in Review next month. In the meantime, please welcome Anna Erishkigal to the blog!

I've been writing this thing or that for a long time, but I didn't write my first 'original' story with the thought that someday I might like to publish it until 2009.  That first rough draft was the beginnings of the Sword of the Gods saga.

I've done non-fiction writing for a long time, legal thesis's and corporate policies and procedures manuals, but I didn't begin writing for fun until they killed the Stargate in 2007.  Coming on the heels of killing Star Trek Enterprise in 2005 and Angel in 2004, I was like the jilted girl who'd had her heart broken one too many times.  That was it, I said.  No … more … television!!!  I started writing fanfiction, mostly about superheroes, but after my third novel-length fanfiction (the last one was 550,000 words) I started writing my own stories combining my three favorite subjects:  angels … superheroes … and spaceships. 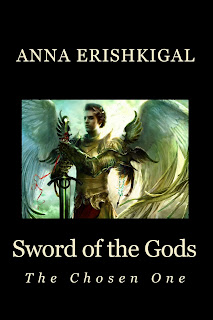 Tell us about your early works—what was the first thing you ever wrote?

My first book was a paranormal/horror piece called The Spook Cellar, published by my wonderful fourth-grade teacher Sandra Dobbyns who sadly died a few years later from breast cancer.  It was about a black cat and a chicken that had to go down into a scary basement and chase away a ghoul.  I had no idea what a ghoul was at the time, but it sounded like a cool scary thing to put in my book.

I actually have a non-fiction legal self-help manual I wrote under my real name that I've been bootlegging since 2001 (it's on the 5th Edition right now), but I didn't consider myself a 'pro' until I began marketing my fiction.  I self-publish my fiction because my non-fiction book is self-published and, once you've already got the legal mechanisms in place to be your own publisher, why go hat-in-hand to New York to beg for what you've already been doing for years?  But marketing fiction is a drastically different ball of wax than the non-fiction stuff.  My self-help legal guide?  I could scratch the information out on a paper bag with lipstick, typos and all, and so long as it's accurate, people are desperate to have it.  Fiction is tough to market.  But I like having the control of being my own boss.

I was an avid reader from an early age, so it would be hard to pinpoint a book that made me say, 'this is it.'  I loved mythology and devoured it from an early age, but the first book I would have to say really impressed me was A Swiftly Tilting Planet by Madeline L'Engle.  The winged horse is what drew me into the story, but it was the concept that you could go back in time and alter small things to change a major outcome which really captivated my interest.  A couple of years later I got the entire Hobbit and Lord of the Rings box set for Christmas and devoured the entire thing before New Year's.

I wish I could write hard Science Fiction [*hah*], but with my paltry scientific background the best I can do is write science-fiction 'decorated' space opera/epic fantasy.  Angels … on spaceships.  Nobody else was writing about my two favorite topics, so I decided to write about it myself.

Epic fantasy (with a hefty dose of science fiction-type decoration).  In my day-job as an attorney I'm used to handling these sprawling, complex legal cases with lots of players, tons of interesting little sub-drama's, and dozens of moving parts that all culminate into a big day at court.  That training carries over into my writing, which I picture as multiple armies on a chess board or Tom Brady moving a pass up the field to hit a touchdown.

If you couldn’t be an author, what would your ideal career be?

Anna Erishkigal is an attorney who writes fantasy fiction under a pen-name so her colleagues don't question whether her legal pleadings are fantasy fiction as well. Much of law, it turns out, -is- fantasy fiction. Lawyers just prefer to call it 'zealously representing your client.'

Seeing the dark underbelly of life makes for some interesting fictional characters. The kind you either want to incarcerate, or run home and write about. In fiction, you can fudge facts without worrying too much about the truth. In legal pleadings, if your client lies to you, you look stupid in front of the judge.

At least in fiction, if a character becomes troublesome, you can always kill them off.

Hey, the lighter space opera is my favorite genre! Don't apologize for not writing the hard tech stuff.
Still mourning the loss of Stargate Atlantis. I wasn't ready for it to end...

Hello Alex! Yes ... miss the Stargate! Keenly... It was nice to have that week-by-week feeling of tackling a problem using a combination of ingenuity, compassion and science, and yet having this over-arching threat. So much of what's on tv now is anti-hero stuff. Give me a good old-fashioned Samantha Carter to build a stargate out of a toaster!