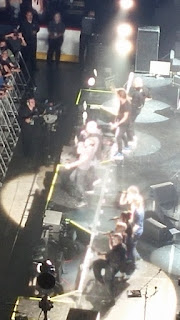 I mentioned in Monday's post that my husband and I saw the Rock Paper Scissors tour featuring Sting and Peter Gabriel on Saturday. We were in the nosebleed section side of stage, or what I think of as the clap-your-hands section after John Lennon's quip "Will the folks in the cheap seats clap your hands, and the rest of you just rattle your jewelry." Eugene and I are happy enough just being able to hear the music. It was a great show, with the two musicians exchanging songs throughout the night. My favorite part occurred during "Games without Frontiers," when Sting and Peter Gabriel strolled down the stage together. I wasn't able to get a picture of that, so here they are during "Sledgehammer."

Watching the two of them together made me think about writing partnerships. I haven't co-authored a story with anyone, and since I'm a pantser, plotting together would be difficult. Still, I think one could learn a lot from working with someone else. If I could write a story with a famous science fiction/fantasy novelist, I think I'd pick someone like Patricia McKillip or Nina Kiriki Hoffman because I like their approaches to the genre. I'd love to work with Lois McMaster Bujold or Connie Willis as well, simply because I'd learn so much from either of them.

If you could pick a famous author to write with, who would it be and why? Alternatively, which authors do you think should have worked together? Feel free to share your thoughts in the comments.

Well, at least you had a unique view of the stage.
I think it would be fun collaborating on a project with someone. Might prod me to actually write again. I think Preston and Child make a great team and would be happy to write with either of them.

I haven't read either of them, Alex, but I'm sure I could learn from them too!

Collaborating doesn't really work for me unless it's separate stories with the same theme.