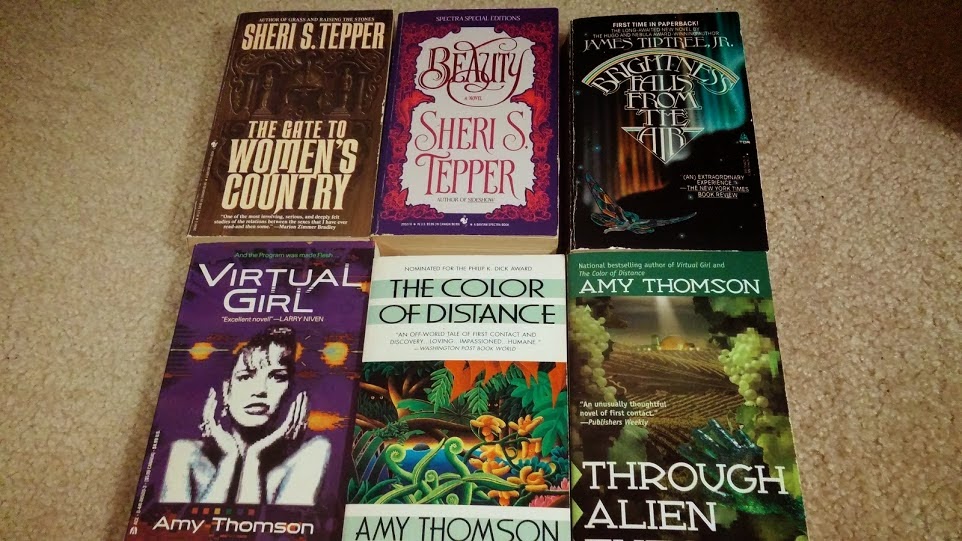 Sheri Tepper was Guest of Honor at the first WisCon I attended. I still remember one of the points from her speech: humans phsyically use as much energy as a dolphin, but when you add in all of the other energy uses in the First World, we each use as much energy as a (sperm?) whale. I'm more familiar with her later work such as Beauty--that one kept me up all night reading!--Grass, and The Gate to Women's Country than I am with her True Game series. Learn more about her on Wikipedia (I don't think she maintains her own website) and find her work on Amazon.

I chose to list Alice B. Sheldon here under her famous pseudonym of James Tiptree Jr. She was a native Chicagoan, a major in the Army Air Forces during World War II, and a woman with "a complex sexual orientation." Her novel Brightness Falls from the Air was another book that kept me reading way past my bedtime; however, I need to read some of her short stories too. Unfortunately, it doesn't look as if her work has been converted into eBook yet. I hope it is so she can find a new generation of readers. The Tiptree Award is named after her, and several of the authors I've already listed have won it.  Learn more about her on Wikipedia and find her stories on Amazon.

Honorable Mention: Amy Thomson, author of Virtual Girl, The Color of Distance, and Through Alien Eyes. Links to Wikipedia and Amazon.

All new to me. Really, I do read science fiction books by women. I can even give you a list.